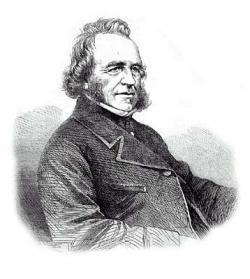 Sir Joseph Paxton was an English gardener and architect, born on 3rd August 1803. He was best known for designing The Crystal Palace in London. He was the seventh son of a farming family, born in Milton Bryan, Bedfordshire. He became a garden boy at the age of 15 for Sir Gregory Osborne-Turner at Battlesden Park, near Woburn. He enroled at the Horticultural Society's Chiswick Gardens in 1823, and spent much time in the grounds of nearby Chiswick House, owned by the 6th Duke of Devonshire. The Duke befriended the young Paxton and became impressed with his skills and enthusiasm, later offering the 23 year old the position of Head Gardener at the family's seat, Chatsworth House in Derbyshire. It was here that he met and married his wife, the housekeeper's niece, Sarah Brown. Whilst at Chatsworth Gardens, he built enormous fountains as well as an arboretum, a 300ft conservatory and a model village. Paxton secured a cutting from Kew Gardens of a Victoria Regia Lily from South
America and designed a heated pool that enabled him to breed the lily to an enormous size. He was forced to rehouse the lily in its own glasshouse, the Victoria Regis House, the design of which was based on the lily's own structure. This went on to form the design basis for the Crystal Palace. The palace was a cast iron and glass building originally erected in Hyde Park to house the Great Exhibition of 1851. It was 1,848 feet long, 408 feet wide and 108 feet high and required 4,500 tons of iron, 60,000 cubic feet of timber and needed over 293,000 panes of glass. After the exhibition Paxton was employed by the Crystal Palace Company to move it to Sydenham in South London where it stood until it burned down in 1936. Although he remained Head Gardener at Chatsworth, Paxton undertook other projects such as the Crystal Palace, as well as being a director of the Midland Railway. He worked on many grand public parks and various country houses in Buckinghamshire, Bedfordshire and even in Paris, France.
He later became a Liberal MP for Coventry from 1854 until his death in 1865. He published various botanical and horticultural magazines and books and suggested several improvements for the Royal Botanic Gardens at Kew. He died on 8th June 1865 in Sydenham, London.

Contributors: Do you have a site related to Joseph Paxton?
Supply some content for this page and we will gladly add a link to your site. Email here.