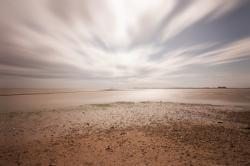 Mersea Island in situated in the estuaries of Blackwater river and the River Colne , off the coast of Essex, England. The island is accessible from the mainland by a causeway, which is frequently covered at high tide, and also by a foot ferry than leaves from Brightlingsea and Point Clear. During the Summer Mersea Island is host to the Mersea Regatta and the annual Round-the-Island dinghies race. Located on the island, Cudmore Grove Country Park houses the remains of some World War II defences and a Tudor fort.