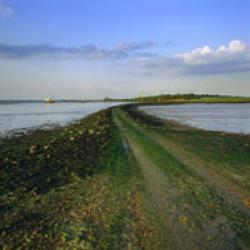 Northey Island lies in Essex, to the south east of Maldon and is managed as a nature reserve by the National Trust. The peaceful island retreat is at the head of the Blackwater Estuary. It can be accessed via a tidal causeway that is thought to be Roman in origin. The causeway is flooded at high tide. The island is the site of the Battle of Maldon in 991AD and is the oldest recorded battlefield in Britain. Northey Islands valuable saltmarshes are used by overwintering wildfowl, including the many brent geese who arrive in the autumn. Up to 5,000 brent geese can gather there from January to March. When summer arrives birds such as the oystercatcher and shelduck nest on Northey Island . Access to the reserve is possible by appointment only.