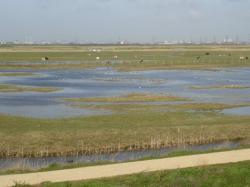 Rainham Marshes is one of a handful of ancient landscapes that has survived in the Greater London area. The medieval marshes are now an RSPB nature reserve and are situated adjacent to the Thames Estuary in Purfleet , Thurrock, in the east of London . The marshes were closed to the public for over 100 years during which time they were used as a military firing range. Partly due to its former life as a firing range, the marshes have retained much of its medieval landscape. It forms the largest single area of wetland to be found along the upper reaches of the Thames Estuary . The RSBP acquired the site in the year 2000 and have transformed it into a valuable habitat for nature, as well as place for people to visit. The marshes are now home to breeding wading birds in spring and summer, and large flocks of wild ducks can be seen there in winter. Birds of prey and other rare birds are also regularly sighted at the marshes. Water voles, now a threatened species in the UK, live in the in the ditches and rare dragonflies enjoy the protection of the nature reserve. In December 2005 the marshes were host to a Sociable lapwing, a rare visit which drew crowds of bird watchers to the reserve.