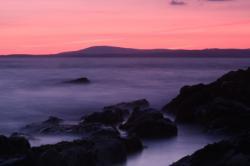 Morecambe Bay is a large bay situated along the in northwest coast of England. It is almost due east of the Isle of Man and lays a little south of the Lake District National Park. Morecambe Bay is the Britains largest expanse of intertidal mudflats and sand, it covers a total area of 120 square miles. Tides in the bay are extremely dangerous and a local saying suggests they come in as fast a horse can run. Shifting sands and quicksand make it all the more hazardous. 21 Chinese cockle pickers drowned in the '2004 Morecambe Bay Disaster' when they were swept away by the tide. The bay is fed by the waters of several rivers. The Kent, Keer, Lune, Leven and Wyre all drain into the Bay. The estuaries of these rivers form a number of peninsulas within the bay, including Humphrey Head. There has been substantial reclamation of the land around the bay and this has formed extensive salt marshes for use in agriculture. Morecambe Bay is an important habitat for wildlife, including abundant bird life and a variety of distinct types of marine habitats. Walney Island, which lies west of the Furness peninsula, is the site of a bird observatory.