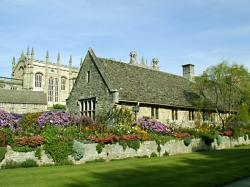 Oxford is of course famed worldwide for its historic university, but in recent years Colin Dexter 's curmudgeonly but endearing detective Morse ('just Morse') has added to the attraction of one of Britain's most beautiful cities.
Morse, who left his studies at St John's after two years, eventually returning to the city's police force, manages to encapsulate in one figure the nowadays quiet conflict in Oxford between town and gown, the sometimes condescending academics in the story barely tolerating the mere copper. The city provides a magnificent backdrop for the novels and stories, and of course this translated beautifully to the small screen.
A love of real ale is one of the key points of Morse's character, making him at once discerning, vulnerable, and human - and his love of not paying for a round made him at the same time like one of those friends we love and yet resent, incapable of setting hand to wallet. There are some wonderful pubs and inns in Oxford, as would be expected of a place full of students. Several feature by name in the Morse books. There is the Eagle and Child on Wellington Place, a 16th century building that has been a pub since 1650 (doubly famous in the world of literature given CS Lewis and JRR Tolkien - both it seems unable to afford full first names on academic salaries - regularly supped there). Then right in the centre of Oxford is The Bear Inn , on the corner of Alfred and Blue Boar Streets, used in Death is Now My Neighbour, a pub that makes the Eagle and Child look positively recent, established it is said in 1242. Most intriguing of Morse's pubs, however, is The Turf Tavern , which takes some detective work to find down a narrow passage off Bath Place. The Turf is the English pub of fantasy made real, a warren of a place, and with good beer. Beer of course was central to Morse's persona, and in Oxford his love of the stuff perhaps was sparked by Oxfordshire's Brakspear ales, well worth a taste. One more hostelry needs to be mentioned here: The Randolph Hotel , opposite the Ashmolean Museum. The action in The Wolvercote Tongue begins here, and Morse famously praised the hotel's beer - his "decent pint" remark now commemorated by a plaque and by the main bar being named for the detective.
The great buildings of Oxford of course gave Morse a wonderful stage: The Ashmolean Museum , The Pitt-Rivers Museum , The Carfax , the tower at the centre of Oxford from which views of the city open up before you, The Sheldonian Theatre featured in the suitably Wagnerian Twilight of the Gods, and the distinctive dome of The Radcliffe Camera, now the reading room for the Bodleian Library , the former featuring in The Daughters of Cain, the latter in The Wench is Dead.
But it is the honey coloured colleges of Oxford that provide the tone and so many of the protagonists for the Morse mysteries, the students and academics who at times drop like ninepins, their guilty secrets eventually exposed by the endeavour of Morse. Brasenose is Lonsdale College, a regular sight in the TV series, home to some weird, wonderful and candid carvings of monks that should be sought out. The musical traditions of Oxford are harnessed by Colin Dexter, with Morse singing in Oriel and listening in Exeter.
There are guided tours aplenty for lovers of Morse, and detailed information available such as The Oxford of Inspector Morse by Bill Leonard, generally to be found in another celebrated location used in the novels (both The Daughters of Cain and Service of All the Dead), Blackwell's Bookshop .
For those who prefer the open air, the waterways of Oxford provide some breathing space, as well as a convenient place to discover several bodies in the Morse cannon: a stroll along the Oxford Canal, The Cherwell, and The Thames will conjure up memories of the morose but much missed Morse.
Dreaming Spires and nightmare discoveries combine superbly in Colin Dexter's work, enhancing what is already a fabulous destination for short or longer visits.