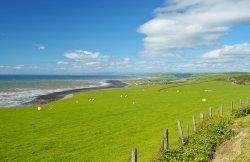 Aberystwyth
Did you know that the Crown jewels were kept in Aberystwyth during world war II ? A huge (and by then air-conditioned) cave there also provided a safe haven for early Shakespeare documents, a copy of Magna Carta , manuscripts by Bacon , Milton and Spenser , and vast numbers of other valuable books and other cultural artifacts kept safe from the German bombing elsewhere.
Did you know that Aberystwyth has the highest ratio of books to people in the world - 6 million books to 20,000 inhabitants
Did you know that British Rails last steam-operated line endured until 1989? The Rheidol narrow gauge railway between Devils Bridge and Aberystwyth was still using its original steam engines up to the point when it was privatised. The 12-mile line, opened in 1902, continues to operate those wonderful machines to this day in its independent guise.
Cardigan
Did you know that what is regarded as the first eisteddfod took place in Cardigan Castle in 1176? The event was held on Christmas Day and Boxing Day, part of the celebrations to mark the completion of the castle (begun in 1171) and to honour its builder, Rhys ap Grufydd. Musical victor was one of Rhys own household; the bardic title was bestowed on a man from Gwynedd.
Laugharne
Did you know that Laugharne is the only place in Britain where the office of Portreeve (originally a Saxon post, roughly translated as Market Official) is confirmed by Act of Parliament? The Portreeve is elected every six months (though nowadays serves longer), to preside over the Grand Jury of 21 burgesses at the Court Leet and Court Baron. Aside from the honour the office holder also gets the use of a plot of land, the Portreeves Field, something perhaps of more significance when the system began in about 1290.
Pembroke
Did you know that the biggest round keep of any British castle is at Pembroke ? It rises nearly 80 feet above the ground; has a diameter of more than 50 feet; and at the thickest part possesses stone walls 16 feet thick. The four-storey keep, with an impressive domed roof, was built by William Marshal, Earl of Pembroke, who faced threats from the Welsh; and on occasion from King John .