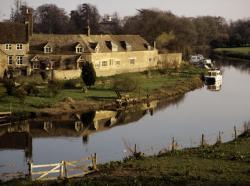 The River Great Ouse is a river that flows for 150 miles through the east of England. It is the fourth-longest river in the United Kingdom and by far the most important navigation in East Anglia. The lower reaches of the river are sometimes locally referred to as 'Old West River' and 'the Ely Ouse'.

Multiple sources close to the villages of Syresham and Sulgrave in Northamptonshire combine to form the origins of the river. It then flows through Brackley in Buckingham and Milton Keynes at Stony Stratford . It passes several more centres of population as it reaches eastward. Newport Pagnell , Olney , Bedford , St Neots , Godmanchester , Huntingdon and Hemingford Grey all sit along the river. As does St Ives , the cathedral city of Ely . The Great Ouse then passes Littleport and Downham Market before the it finally enters The Wash at King's Lynn .

The river is popular with boaters. In a one off event, in 1944, the annual boat race between the ancient Oxford and Cambridge universities was held on the Great Ouse. The race was run between Littleport and Queen Adelaide and was won by Oxford. It was the one and only time that the world famous event has not been held on the Thames in its very long history.

The Ouse Valley Way is a 150-mile footpath that follows the River Great Ouse from its source near Brackley in Northamptonshire, all the way to its mouth in The Wash close to King's Lynn. As yet the path still strays from the course of the river in parts but, in time, the gaps will be joined to keep the path on the river bank.

The trail passes through some of the most beautiful countryside in a region that is abundant with wildlife. The Ouse Valley Way also takes the traveller through picturesque villages, ancient English market towns, old churches and a cathedral.

The Ouse Washes, the area between two diversion channels of the River Great Ouse, are now of international importance. They have been designated as a Special Protection Area in recognition of their wildfowl. Nature reserves have been established at WWT Welney and RSPB Ouse Washes . The Ouse Washes, being covered for an average of 22 days per year, are the largest area of frequently flooded grazing marsh in Britain. The site is a Ramsar site, a Special Protection Area (SPA) and a Special Area of Conservation (SAC), as well as being designated as the Ouse Washes SSSI - a Site of Special Scientific Interest.