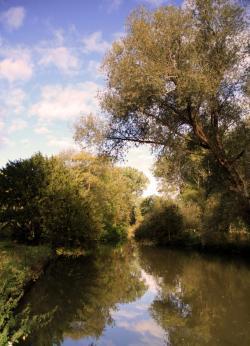 The River Cherwell is a large river flowing through the Midlands region of England. The river rises in the ironstone hills at Hellidon, two miles (3 km) west of Charwelton near Daventry . The general course of the River Cherwell is north to south and, as the crow flies, it is 32 miles from its source to the Thames. It runs through Northamptonshire for about ten miles and then into Oxfordshire for the remainder of its journey to Oxford where it joins the Thames. The River Cherwell runs around the east side of Cropredy and passes under Cropredy Bridge, the site of a major battle of the English Civil War in 1644 . The town of Banbury is also alongside the River Cherwell and owes its existence to the river. The Cherwell enters Oxford on northern side and flows south via the eastern edge of Oxford town centre. Further south, the Cherwell passes the various buildings of ancient Oxford University. It is a major tributary of the River Thames and swells the discharge of the Thames considerably at their confluence in Oxford. When flowing into Oxford, the Thames' discharge is 622 cu feet per second but after the Cherwell joins it, the Thames has increased its discharge by around a third to 876 cu ft/s.