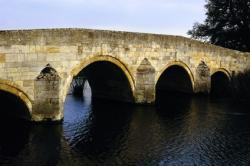 River Nene flows in the East of England for a total of 91 miles, when measured from the river's most westerly source near the village of Badby close to Daventry . It runs through Northamptonshire in the Midlands, Cambridgeshire, Norfolk and Lincolnshire. It enters the sea at The Wash in Lincolnshire. It rises at three sources near Badby, Naseby and Yelvertoft. It becomes navigable at Northampton near Dodford mill, the point where the three tributaries combine.

In Northamptonshire the river meanders through the rolling farmland that typifies the county. It also passes by the industrial areas of Northampton, Wellingborough and Irthlingborough. The Nene connects to the the Grand Union Canal as well as the river Great Ouse , via the Middle Level System. The Environment Agency navigation starts at the junction with the Northampton arm of the Grand Union Canal near Cotton End Lock. It extends for 91 miles as far as Bevis Hall, just upstream of Wisbech .

After meandering among the gentle hills of Northamptonshire, the Nene enters the rural part of the cathedral City of Peterborough . It passes the Nene Valley Railway and flows on through the Nene Valley Country Park. Just half a mile upstream of the Peterborough's busy city centre is the site of the old sea lock at Woodston Wharf. This was originally the extent of the tidal River Nene, right up until the Dog in a Doublet lock at Whittlesey was opened in 1937.

After the Dog-in-a-Doublet Lock the river flows through Lincolnshire to the once busy port of Wisbech. It then runs on to another port, this time at Sutton Bridge . Then it is on to the Wash, where it enters the North Sea between the two towers known as 'The Lighthouses'.

As with many other inland waterways in Britain, boat traffic has gradually increased in recent years with almost all of the increase being leisure craft. However, the Nene is still quiet when compared with and the country's canals and the major regional navigation, the River Great Ouse. Canoeists also use the Nene although it can be a challenging river to navigate on a small craft due to the many weirs and sluices along its length.