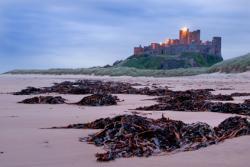 Lindisfarne (also: Lindesfarne or Holy Island ) is a tidal island off the coast of Northumberland, in the north-east of England. The island is reached by a causeway that connects it to the mainland of Northumberland. The causeway is tidal and floods twice a day when the tide comes in and cannot be used either by vehicle or on foot during a high tide. The road has refuge boxes for those caught crossing when the tide sweeps in.

The island is a special place for wildlife and so large parts of the island, and all of the adjacent inter-tidal area, are protected as the Lindisfarne National Nature Reserve . This designation was specifically granted to protect the internationally important wintering bird populations.

The reserve is of vital importance to a wide range of species that include Bar-tailed Godwit, the Pale-bellied Brent Goose, Dunlin, Merlin, Wigeon, Teal and the Pintail. The island's east coast location also makes it ideal for spotting migrating birds arriving from the east. Redwing and Fieldfare are seen in large numbers but rarer Siberian birds include the regular annual visitor the Yellow-Browed Warbler. Other very scarce species such as Radde's Warbler, Dusky Warbler and Red-flanked Bluetail have been sighted on Holy Island. Almost 300 species in total have been recorded on the island and adjacent reserve. The area is obviously extremely popular with bird watchers with such a variety of birds around, particularly in the Autumn and Winter. As well as birds, Grey seals are frequent visitors to the rocky bays of Lidisfarne at high tide.

The famous monastery of Lindisfarne was founded by Irish born Saint Aidan around AD 635. Some Monks came from the community of Iona to settle on the island. Saint Cuthbert, Northumberland's patron saint, was a monk and later the Abbot of the monastery. He subsequently became Bishop of Lindisfarne.

For much of its history, Lindisfarne has been mainly a fishing community. Agriculture and the production of lime also played their part in the local economy. The Holy Island of Lindisfarne is famous for mead. In the medieval days the monks brewed the Lindisfarne Mead with religious fervour. Lindisfarne mead is still produced at St Aidan's Winery . The mead's recipe remains a secret, known only by the family which still produces it.

Lindisfarne is a magical and beautiful place and understandably this has made it extremely popular with visitors. As space and facilities on the island are very limited, it can sometimes prove a little too popular! To experience the island in more tranquility it is best to remain on the island when it is cut off by the tide, as most day visitors leave when the tide is rising again.

It is still possible, when the weather and tide permit, to cross the sands by the older causeway known as the Pilgrims' Way. The way is marked with posts and even has refuge boxes for the careless walkers who get caught by the tide