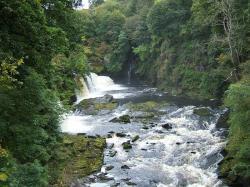 The Falls of Clyde is the name given to four waterfalls, or Linn, along the River Clyde near New Lanark, South Lanarkshire, Scotland. The Falls of Clyde are in two sections, upper and lower. The upper falls comprise of Bonnington Linn, Corra Linn, Dundaff Linn, and the lower falls of Stonebyres Linn.

With a fall of 90 feet is Corra Linn is the highest of the group. Corra Linn and Dundaff Linn lie above New Lanark . They are within the Falls of Clyde Reserve which is managed by the Scottish Wildlife Trust, a national nature conservation charity. Stonebyres Linn, which makes up the lower falls, is found several miles downstream from New Lanark.

Falls of Clyde Reserve is an area of mixed woodland. Within its are some patches of semi-natural native oakwoods and some areas of conifer plantation. The reserve is an excellent habitat for badgers, roe deer, and over 100 different species of bird. A breeding pair of peregrine falcons have made the reserve their home. The pair are protected during the breeding season by Operation Peregrine. Using scopes and CCTV this provides security for the birds as well as giving the public a chance to watch the birds. The Clyde River, which flows through the reserve, also offers a useful habitat for Otters, Kingfishers and the protected Brook Lamprey.

For many years the area has attracted visitors. The Clyde walkway long distance path passes all four falls and ends at Bonnington Linn bringing in modern day tourists and walkers. In history, the Wordsworths, Coleridge and Sir Walter Scott are all known to have visited the Falls. William Wordsworth immortalised Corra Linn, the largest of the waterfalls, in verse he wrote in 1802. Corra Linn has also been the subject of many paintings, with J.M.W. Turner being among many of the artists to have painted the falls.

The 15th century Corra Castle, now home to a family of rare bats, is next to Corra Linn. The Pavilion, built by Sir John Carmichael of Bonnington, probably in 1708 stands near to Corra Linn. The Pavilion once had mirrors mounted on its back wall so that when the doors were opened, visitors had the illusion of standing beneath the falls. Corehouse, built in 1844, the home of the Cranstoun family, is also near the falls.