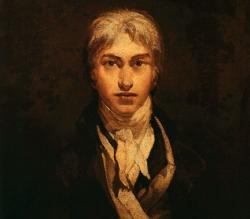 Joseph Mallord William Turner, the painter of light, remains a towering figure in English art. His art looked forwards rather than being merely of his time and his approach to landscape was later to influence the French Impressionists.

Turner was born on April 23, 1775, near Covent Garden. From an early age he displayed a prodigious talent for painting. At the age of 15 he had one of his watercolours exhibited at the Royal Academy. By 1802, aged 27, he was a full member of the Academy and was able to travel to Europe. His early work was topographical but as he gravitated towards Romanticism his handling of paint became freer and more assured. Working with watercolours he was able to make atmospheric studies of landscapes and skies. When he visited Italy his paintings of Venice skilfully evoked the effects of sunlight on water. As the mid 1830s approached, Turner's paintings began to show less structural detail and became more an evocation of place via the effect of light, form and colour.

In 1840 he met the critic and artist John Ruskin, who became the great champion of his work. However, despite public acclaim Turner remained a reclusive man - his contemporary Delacroix described Turner as Silent, even taciturn, morose at times, close in money matters, shrewd, tasteless, and slovenly in dress". Increasingly eccentric he would often refuse to sell his paintings or having done so would try to buy them back. Even when his paintings were exhibited he could be seen with a wet paintbrush finishing them off!

His famous later paintings; Snow Storm - Steam-Boat off a Harbour's Mouth (1842) and Rain, Steam and Speed - Great Western Railway (1844) were ridiculed when first exhibited but are now are seen as pioneering in their expressive technique.

Shortly before his last breath was taken, Turner somewhat immodestly stated: "It is through these eyes, closed forever at the bottom of the tomb, that generations as yet unborn will see nature."

Contributors: Do you have a site related to Joseph M W Turner?
Supply some content for this page and we will gladly add a link to your site. Email here.