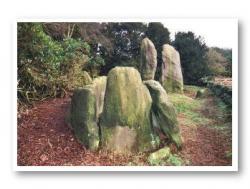 The Bridestones are all that remain of a once grand burial chamber built in 9500bc. Based in Cheshire, England they sit at 820 foot above sea level on western edge of a pass with views out over the Cheshire Plain . Due to thousands of tons of stone being removed since its construction, only a handful of stones remain though evidence shows that The Bridestones complex would have measured 110 metres with a 11 metre wide cairn. It also has a number of unusual features; such as its crescented forecourts, that set it apart from many other neolithic monuments in England.