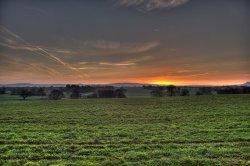 The Cheshire Plain is situated within the county of Cheshire, in the northwest region of England. The area is mainly flat and is surrounded by the hills of North Wales to the west, and the Peak District of Derbyshire and north Staffordshire to the east and southeast. To the northwest of the Cheshire Plain is the Wirral Peninsula , the Cheshire Plain then merges with the South Lancashire Plain. To the north is the city of Manchester . The plain features two areas with distinct characters, the one to the west of the Mid Cheshire Ridge and the other, larger, part to its east.

Geologically, the Plain is the surface expression of the Cheshire Basin. This a deep sedimentary basin extending north into Lancashire and south into Shropshire . This landscape is the result of the passage of vast ice-sheets across the area in the last ice age. When the ice sheets melted away, between 20,000 and 15,000 years ago, they left behind a thick cover of glacial till and extensive tracts of glacio-fluvial sand and gravel. Today the Cheshire Plain is a mainly rural region, with dairy farming being the main form of agriculture. The result is a typical English landscape of fields enclosed by hedgerow.