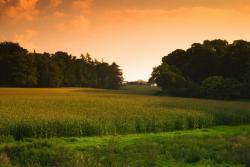 Go to our A E Housman page
A strange discovery for anyone looking beyond the surface of Housman's beautiful poetry in A Shropshire Lad is that he began the work having never visited the county, although it was only a matter of 30 miles or so from his childhood home in Worcestershire . But the Clee Hills formed part of the distant view in that childhood in Bromsgrove : "I had a sentimental feeling for Shropshire because its hills were our western horizon," he once wrote.
Housman Country then takes in the reality of his early life and the world of his imagination, the former in Worcestershire, the latter in Shropshire, though he did get to know the county better in time, and it is where his ashes lie too. But the poet used the distant county, re-created it in his imagination, as somewhere of lovely fantasy, of a lost purity and beauty: in the fortieth of the 63 poems that comprise A Shropshire Lad, perhaps his best known verse, he wrote: "What are those blue remembered hills, What spires, what farms are those, That is the land of lost content".
AE Housman was born in the Worcestershire hamlet of Fockbury, on March 26th 1859, his family home an imposing and impressive red brick pile that speaks of upper-middle-class solidity. Soon the Housmans moved to Bromsgrove, then a market town of 3,000 or so inhabitants, but already a part of the bustling industrial world around Birmingham . The future poet was brought up in another large property, now a hotel, on Kidderminster Road in Bromsgrove, and educated at Bromsgrove School . The local tourist office can provide a leaflet detailing places in the area with Housman links, which includes a statue of him in the High Street. And of course Worcestershire features in A Shropshire Lad, painting a picture of Bredon Hill, which sits between Tewkesbury and Evesham , in summer and winter.
But the heart and soul of Housman country is southern Shropshire, above all its most important town, Ludlow .
Ludlow features in several of A Shropshire Lad's poems: in The Recruit, the third poem, he writes of the hum of Ludlow Market on a Monday and the quiet streets there on a Sunday, though the church bells are calling to the countryside around; and uses Ludlow tower as a symbol of endurance and survival. And in poem 58 Ludlow is a place of promise and despair, a mood balanced by some of his most life-affirming lines in the penultimate poem in the work : "Oh I have been to Ludlow fair And left my necktie God knows where, And carried half way home, or near, Pints and quarts of Ludlow beer".
The wonderfully preserved medieval town of Ludlow, with its magnificent castle and atmospheric market place, chimes with the poets view still. And in the town there is St Laurence's Church, part Norman part 15th century, whose bells Housman commemorated, and which now returns the favour with a tapestry illustrating A Shropshire Lad, and in a corner of the churchyard the resting place for the author's ashes. The beer is still good too, some served in inns of great antiquity.
Driving out of Ludlow on the B roads heading north to Much Wenlock the view to the left for mile after mile is Wenlock Edge , the wooded escarpment which the poet brings to life in two sections of his great work: in poem 31 "On Wenlock Edge the wood's in trouble, His forest fleece the Wrekin heaves,", and in poem 39 "Oh tarnish late on Wenlock Edge, Gold that I never see". There could be little more fitting to such a trip than listening to Vaughan Williams  On Wenlock Edge while making it.
If Housman's words conjure images that capture the heart of rural Shropshire, they sometimes blur the details: Hughley Steeple is a fiction, the place chosen because the real location had an ugly name ill-suited to verse.
But details are not important, the spirit of the work and its evocation of a time passing away are, perhaps never seen better than in the opening verse of poem 50: "Clunbury, Clunton, Clungerford and Clun , the quietest places under the sun". Yet there is still rural quiet and beauty aplenty in south Shropshire: is there a prettier village in the country than Need Sollars? A more characterful church than the 12th century St Mary's in Cleobury Mortimer, which however has its priorities right with eight pubs serving a population of fewer than 2,000? For those disappointed by the lack of a steeple at Hughley they will find a fantastic example in Cleobury Mortimer, twisted and kinked by warping wood. Both settlements sit on the border with Housman's Worcestershire. And further to the west Bishops Castle in Shropshire's Welsh Marches captures still the essence of rural England.
Housman's yearnings, for the love that was never returned by his lifelong friend Moses Jackson, and for a rural idyll rapidly disappearing, give much of A Shropshire Lad a melancholy tone. But that rural idyll has not been lost in the century and more since the work was written, and those exploring southern Shropshire can find it at every green end and beautiful turn.