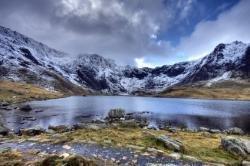 Bala
Did you know that Bala Lake is the largest natural lake in Wales and is home to a white fish called the Gwyniad - found nowhere else on the planet? Its ancestors were trapped in the waters there at the end of the last Ice Age.
Did you know that in 1865 153 colonists (mainly from Bala) left wales and set up Patagonia in Argentina. There were two aims  escaping the economic slump and creating a haven for Welsh culture. The community is still going strong today, with perhaps 5000 descendents of those and later settlers able to speak Welsh; Welsh folk-customs and foods likewise thrive.
Conwy
Did you know that the smallest house in Britain is in Conwy? The red-painted Quayside one-up-one-down property is just 10 feet deep and 6 feet wide, and 10 feet two inches high. It appears that building work left a tiny gap between other houses that someone enterprisingly filled. The last resident was a fisherman 6 3 tall who lived in the place until about 1900.
Corwen
Did you know that what is regarded as the first significant modern Eisteddfod was held at Corwen in Clwyd in 1789? Local customs official Thomas Jones was the driving force. Strangely for an even celebrating Welsh language and culture poetic subjects upon which bards were to compose verses included the recent recovery of George III; Mr William Pitt; and Queen Charlotte. The prize for penillion singing went to harpist Lewis Roberts of Maentrwog.
Harlech
Did you know that when it was completed in 1289, Harlech Castle in West Wales was right on the coast, whereas now it is a mile or more inland? Over the centuries the sea has distanced itself from the great rock on which it stands, from which the castles well protected way to the sea stairway led down the cliff to sea level. Link: Text from http://www.britain.tv/
Llandudno
Did you know that Lewis Carroll is believed to have had the idea of writing Alice in Wonderland while staying in Llandudno? He was summering at Pen Morfa, the West Shore holiday home of Dean Liddell with the latters family. Carroll (Dodgson if you prefer) seemingly began writing it there, and even read extracts aloud to entertain the Liddells and fellow guests who included Gladstone.
Llangollen
Did you know that the wettest place in Britain is Crib Goch, a mountain ridge near Llanberis? Over the last three decades that particular spot in beautiful Snowdonia has averaged 4473mm rainfall annually. Compare that if you will with the driest spot in these isles, St Osyth in Essex, with 507mm; or the supposedly wet Manchester which averages 810mm.
Porthmadog
Did you know that in 1170 the legendary Prince Madoc is said to have sailed from Borth-y-Gest near Porthmadog on his way to discover America? The story goes that Madoc and one of his brothers gathered fleets which sailed across the Atlantic, landing near what is now Mobile Alabama. Madoc returned to Wales, recruited settlers, and set out again, never to return. Snippets of evidence that could hint at an underlying truth  local stories and some forts inland of Mobile unlike any others of Native American origin  give pause for thought.
Rhos On Sea
Did you know the beautifully plain St Trillos Chapel in Rhos-on-Sea is the smallest in Britain at 11ft by 8ft? The tiny greystone building on the foreshore seats just six. It stands over a spring where St Trillo established a chapel in the 6th century. The chapel still holds regular services.
Wrexham
Did you know that the Pontcysyllte Aqueduct near Wrexham is both the longest and highest aqueduct in Britain? Built by Thomas Telford (under the supervision of the then more experienced William Jessop) it is a cast iron trough more than 1000 feet long, held 128 feet above the ground. The structure opened to traffic on November 26 1805. It is now a World Heritage Site.