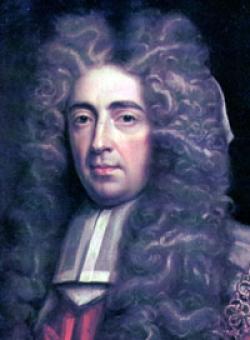 The notorious Hanging Judge rose to power with James II and fell with him during the fierce religious and royalist divisions of the 17th century.

Born on May 15, 1645 at the family estate of Acton Hall, Wrexham, George Jeffreys entered Trinity College Cambridge in 1662 but left after one year for the City of London where he acted as an advocate in the Inner Temple even before he was officially called to the bar.

In 1668 Jeffreys began his meteoric legal career as Common Sergeant in the City of London. Despite his Protestant upbringing he was made Solicitor General to the Duke of York, the future James II, in 1676. Jeffreys was knighted in 1677 and progressed to increasingly powerful judicial roles being appointed Lord Chief Justice in 1683.

Following his accession to the throne in 1685 James II named Jeffreys Lord Chancellor and elevated him to the peerage, making him Lord Jeffreys of Wem. Had he not been tainted with Protestantism the Catholic James II would have elevated him even further. With the failure of the Duke of Monmouths attempt to claim the throne and his execution in 1685 Jeffreys presided over the trial of Monmouths followers. The harsh sentences he handed out during the Bloody Assizes earned him the nickname The Hanging Judge; almost 200 rebels were hanged and 800 transported.

A reversal of fortunes followed when James II fled the country following the Glorious Revolution of 1688. Jeffreys found himself in the Tower of London for his own safety and he was to die there of kidney disease on April 18, 1689.

Contributors: Do you have a site related to Judge Jeffreys?
Supply some content for this page and we will gladly add a link to your site. Email here.