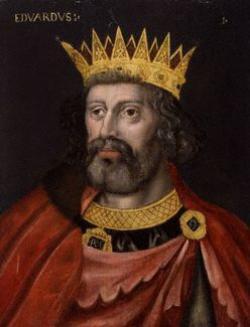 Born in Caernarfon, North Wales
Born on 25th of April 1284
Died in Berkeley, Gloucestershire
Died on 21st of September 1327

Edward II was born the fourth son of Edward I, on the 25th April 1284 at Caernarfon Castle in Wales, his mother was Eleanor of Castile in Spain who died when Edward was aged just six years old.

Edward II was the sole survivor of his three elder brothers, and he became heir apparent when he was just four months old, and,after his father's death on 7th July 1307, Edward II came to the throne. His Coronation took place in Westminster Abbey in London on 25th February 1308.

Edward married Isabella who was the daughter of Philip II of France, and they had four children, 2 sons John, and Edward, who was destined to reign, and two daughters Eleanor and Joanna. Edward was the first monarch who established Colleges in the prestigious Universities of Oxford with Oriel College, and King's Hall in Cambridge, he was also the first ever prince to have the title of Prince Of Wales bestowed.

Edward's father had groomed him in the years preceding his acessetion in the art of Warfare, unfortunately Edward favoured enjoying himself with leisurely pursuits, and in his early years formed a friendship with Piers Gaveston, Edward's father was furious and blamed Gaveston for having a bad influence on his son, and had him banished. On the death of his father he welcomed his friend back into the fold. Edward generously gave Gaveston wealth and many privileges which enraged the Barons, and ultimately was the cause of Gaveston's demise.

Edward had a new favourite in Gaveston's brother in law, Hugh Despenser, again friction and resentment was brewing with the Barons, and increased when he hankered after the Earldom of Gloucester. Edward refuted the laws, however, his hands were tied when the Earls of Lancaster and Hereford's patience were exhausted and turned against the Despenser's, this resulted in the King banishing them.

Edward's wife Isabella set sail for France at Edwards request to negotiate peace after a dispute had erupted betwixt England and France when Edward had refused to pay homage to Charles, Edward sent his son instead. Isabella plotted against her husband and aided by Mortimer planned an invasion. Edward was plagued by betrayal with switched alliances, and was deserted by many including his servants, he took refuge in Gloucester and later in Wales. He was captured and taken to Kenilworth, Isabella took possession of the Great Seal and took over the ruling of the country with the help of Mortimer. Choices were limited for the Queen, imprisonment or execution, fearful of the ramifications, and with the help of Mortimer Government were persuaded to support her and depose Edward. With no other option, Edward agreed to abdicate on the condition that his son would be crowned King. He died at Berkeley Castle on the 21st September 1327, of, it is believed a grisly death.
Buried here

Contributors: Do you have a site related to Edward II?
Supply some content for this page and we will gladly add a link to your site. Email here.