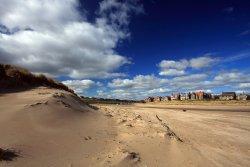 Bamburgh
Did you know that the Norman Bamburgh Castle was the first castle in Britain to fall to cannon fire? Built on a basalt hill it was immune to undermining and difficult to attack with trebuchets. But in 1464 the Earl of Warwick used three great cannons named London, Newcastle and Dijon, to force the surrender of its garrison.
Berwick-upon-Tweed
Did you know that Berwick-upon-Tweed has changed hands between the English and Scots on 14 different occasions.
Did you know that Berwick-upon-Tweed was officially at war with Russia for 110 years as the border town frequently changed hands between England and Scotland over the centuries it was usually referred to as a separate entity in all State documents. At the outbreak of the Crimean War , Britain declared war on Russia in the name of Britain, Ireland, Berwick-upon-Tweed and all British Dominions. But when the war ended two years later in 1856 , the Paris Peace Treaty omitted Berwick. So Berwick was technically at war with Russia until 1966 when a Soviet official, made aware of the situation, visited the town to declare peace.
Hexham
Did you know that the only Roman milestone in Britain that still stands in its original position is at Chesterholm  Vindolanda - near Hexham? It bears a Latin inscription stating Born for the Benefit of the Republic. The stone is about 100 yards from the Roman settlement. Intriguingly the remains of a great timber palace have been found at the site, dating from about the time of Hadrians visit in 122AD, and thought possibly to have housed the emperor and his household.
Rothbury
Did you know that Cragside at Rothbury was in 1878 the first house in the world to be lit by hydro-electricity? The property belonged to the first Lord Armstrong , the great industrialist who revolutionized artillery design with his innovative breech loader. The hydro-electric plant powered by water from seven lakes in the grounds was not his only technological novelty at Cragside : it also had a passenger lift and fire alarms.
Wooler
Did you know that at Chillingham near Wooler in Northumberland you can see cattle thought to be directly descended from the wild cattle that once roamed Britain? The still undomesticated white animals were apparently kept as a genetically distinct breed because of their enclosure within defensive walls built in the 13th century to guard against Scottish Reivers.