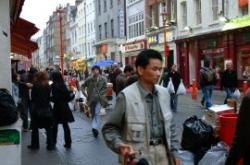 Westend Car Services
"I used this 'car service' to organise my travel home after New Years Eve. My booking was made well in advance, during the first week of November and was confirmed ..." More

Zilli Fish
"In the heart of Soho Zilli Fish on Brewer Street has the feel of a neighbourhood bistro, which is to its credit given the growing fame of its founder - ..." More

Westend Car Services
"Excellent service, driver arrived very quickly and was very polite. I recommend everyone to use this company.

"Having been to Berwick street fruit market, it was a pleasure to have a coffee, at a small shop called Flat White, just beside the market, where we undoubtably had ..." More

Having been to Berwick street fruit market, it was a ...More

It's been described as "London's pounding heart". And while Soho may be bounded by the loud and crowded thoroughfares of Oxford Street, Shaftesbury Avenue, Regent Street and Charing Cross Road, this square mile of narrow streets and alleyways has an atmosphere all of its own, one which feels intimate and welcoming. Coffee shops, cosy restaurants and chic nightspots characterise the rebirth of an area which has cleaned up its act. The former red-light district has shaken off most of the sleazy trappings of yesteryear to present itself as a vibrant and contemporary enclave, with Old Compton Street's lively bars and cafés remaining central to London's gay culture. Music fans may regret the bulldozing of various legendary rock venues in and around Wardour Street, although the Ship pub, which could tell a tale or two, is still open for business, and the world-famous Ronnie Scott's Jazz Club continues in Frith Street. The old and the new co-exist comfortably around the streets and squares of the Soho community. The film industry maintains a traditional presence, the old Berwick Street market is as bustling and colourful as ever, and Chinatown keeps pulling in the crowds with its vivid street scenery and bargain prices.


Places to Stay near Soho

In the heart of London's Theatreland, The Shaftesbury is an air-conditioned boutique hotel with luxury features, free internet access and an excellent location. Best Western Premier Shaftesbury Hotel is located amid theatres, ... More

Ideally located in the heart of London's Theatreland, Hazlitt's has an intimate charm that no large hotel can match.Our philosophy is simple: we have set out to create the kind of ... More | visit website

The Z Hotel Soho has everything you need for a couple of nights in town. Concentrated style, an out-of-town price and the West End  at your feet the moment you step out the door. ... More | visit website
map book

Check availability and book this hotel online with Booking.com

Located in the heart of London's West End, the Sanctum Soho Hotel is a celebration of the neighbourhood in which it stands: like Soho itself, ... More

The first "deluxe hotel" in the Soho district of central London. The property was created on the site of a former multi-story car park between Dean and Wardour Streets. Following the site's demolition, fresh construction ... More | visit website
map website

Founded in 1915 and in the third generation of Togna family ownership, this 13 suite/5 studio room luxury 'gem of a hotel' is wonderfully located 75 metres from Piccadilly Circus, the heart of London.

Emerging from a £15 million makeover due for completion in July 2011, the Radisson Edwardian Mercer Street Hotel effortlessly blends with the boutique appeal of its neighbourhood. A landmark in Covent Gardens Seven Dials village, ... More | visit website
map book

The Seven Dials Hotel is situated in the heart of Covent Garden. Leicester Square, Piccadilly Circus and Oxford Street are three minutes walking distance. The hotel offers a warm and friendly welcome ... More