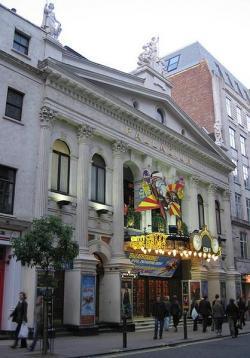 The history of the London Palladium Theatre provides a neat review of popular entertainment in Britain for almost 100 years - more if its previous incarnations are included. From circuses to variety acts, pop to musicals, pantomime and even for a brief time a cinema, the Palladium has been there done that got the dress shirt.
As the Palladium the building dates from 1910, but the well-known facade predates that by around a century, retained from the building that formerly occupied the site, Argyll House, the London residence of the Dukes of Argyll from the start of the 19th century to 1860 - hence the road in the West End on which the theatre stands is called Argyll Street.
For a period before 1910 a wooden building stood on the site, at various times housing (briefly) a strange aviary (called the Corinthian Bazaar), circuses (for two decades, run by the Hengler family), and an ice rink (for ten years from 1895). But the Palladium as we know it is quite a different structure.
The renowned theatrical architect Frank Matcham designed the magnificently opulent Palladium (the London prefix was only added in 1934) that opened in 1910, a vision in coloured marble, plush red upholstery, and Norwegian rose granite. Pink and white were the dominant colours, and there was gilt enough to coat a battleship. The three tiers accommodated 3,435 audience members, the construction setting the developers back a reputed quarter of a million pounds. With various changes to the structure and regulations the theatre now holds just under 2,300 people.
The theatre was planned at the height of the Edwardian era, when the nation let off steam after the restrained and staid Victorian epoch, though the pleasure-loving King Edward died in May 1910, well before the opening night, December 26 1910.
On that opening night the bill was a varied one, with variety artists and a performance of The Conspiracy, a single act drama.
From 1928 the impresario George Black owned and ran the place, although quite soon it was Val Parnell, forever associated with the venue, who did the bookings.
Before WWII The Crazy Gang made their name at The Palladium, and the greatest stars of the day like Gracie Fields , Houdini, Jack Benny, Duke Ellington, Paul Robeson and Burns and Allen all performed there.
Parnell became managing director in 1945. He courted controversy by his policy of bringing the top American starts to the house rather than relying, perhaps more patriotically, on British ones. But it worked, with the likes of Danny Kaye filling the theatre to capacity, cheering up austerity-era London with energy and style. Sinatra, Garland, Bob Hope, Dean Martin and a host of similar big names carried on drawing in the crowds for years.
But then television threatened the stage. Parnell was smart enough to see the way out - don't beat 'em, join 'em. In 1955 he teamed up with Lew Grade of ATV, and in the first week of commercial television broadcasting in Britain a show that became a fixture for more than a decade had its first airing: Sunday Night at the London Palladium.
Tommy Trinder was the first compere, followed by Bruce Forsyth (a bust of whom adorns the theatre now), and Norman Vaughan (commemorated with a plaque). At its height the show attracted TV audiences of some 24 million. This was about half the total population, and not every house had a TV set at this time.
The show followed a very set format, with the audience participation game show Beat the Clock, a varied list of performers introduced by a comic compere, and a finale with the revolving stage crowded with the cast waving to the audience in the theatre and at home (though Judy Garland was once too "emotional" to stand on the moving stage, and the Rolling Stones refused).
The show ended in 1967, though various revivals have been attempted, even as recently as the year 2000. By 1967 its format was looking tired, and the audience wanted something different.
Pop gigs have been a regular money-spinner for the theatre, with Slade, Elkie Brooks, Marvin Gaye and many more making memorable music there.
Andrew Lloyd Webber 's Really Useful Group took over the building in 2000, since when it has staged the fantastically successful Chitty Chitty Bang Bang, their first show there, The Sound of Music, and various other productions. Chitty though was not the first full musical seen in the Palladium - Sammy Davis Jr starred in Golden Boy there in 1968, and Hans Anderson, The King and I, La Cage aux Folles and various others ran in the theatre before the Really Useful era began.
One event very closely linked to the venue is The Royal Variety Performance. Other theatres have been used too, but it is the Palladium that the national memory recalls first if the subject is brought up.