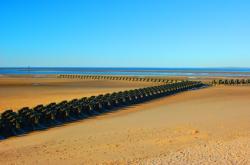 For those who dont know much about the area, at first mention the Wirral may not strike you as the ideal place for a break, though that in itself could interest some. But there are some wonderful open spaces, great stretches of natural coast for watersports, birding and a simple stroll on the sand, and a wealth of fascinating attractions to be found in this peninsula .
Lets start with one of the big guns: Port Sunlight . This late Victorian model village was built by the industrial magnate and philanthropist William Lever, and is an utterly entrancing tour de force of liveable architecture, much of it Arts and Crafts ( Morris a major influence), though with odd dashes of Flemish, English village vernacular including pargetting, and other styles, each block of buildings designed by a different architect. Some 900 buildings here are listed! A great place for a stroll, though dont forget to visit the Lady Lever Art Gallery  its free  where the Pre-Raphaelites are very well represented in the collections, along with earlier British artists including Turner, Gainsborough and Reynolds, and some fine Chinese ceramics.
While we are doing the cultural bit, Birkenhead Priory is worth a call, the oldest building still standing in Merseyside. Birkenhead too, as many will know, has a vast public park that was a major inspiration behind the creation of New Yorks Central Park.
Thats far from the only major open space here either: Wirral Country Park was the first such designated place in Britain when it opened in 1973. The park utilizes the railway land vacated in 1962 (no) thanks to Beeching, and contains the Wirral Way, a walk from West Kirby to Neston and Hooton, several miles of it skirting the Dee Estuary . Along the way it takes in Parkgate, a pretty village which has wonderful birding on the nearby sands and a noted ice-cream parlour.
The most famous open space globally if perhaps not locally in the Wirral is Hoylake Golf Course, home of the Royal Liverpool Golf Club . If you are a keen (and good) golfer its possible to play this regular Open Championship venue, but youll need pockets as deep as your golf bag for the green fees (£100 currently for a weekday round in the main season) and your handicap certificate (21 or better men, 32 women). We hackers should head perhaps for the municipal at the Arrowe Country Park north of Thingwall, or even that parks pitch and putt.
As a peninsula of course the Wirral has plenty of coastline. The eastern side tends to be the more industrial, while the west can be splendid: West Kirby is a proper old-fashioned seaside resort whose huge Marine Lake is a good place for boating and for learner sailors.
The other coastal spot not to be missed is New Brighton at the northeast tip of the peninsula, with its lengthy prom and traditional seaside amusements including a small fun-fair. The front here is undergoing a poshing-up process with an eventual £60 million of investment planned. At the tip of the land beyond New Brighton is one of the most atmospheric attractions here, Fort Perch Rock , a post-Napoleonic Wars coastal defence battery that now houses a museum and cafe. Look east from New Brighton and you can gaze at the Liverpool Waterfront that has had even more spent on it of late.
For rather fancier fayre than hotdogs and candyfloss (not that there is anything wrong with either!) the Wirrals Michelin-starred Fraiche restaurant in Oxton will draw foodies, and a variety of excellent hotels and some noted gastro-pubs offer alternatives.
Two more attractions should go on any visitors to-do list here, perhaps appealing to different clienteles. The first is the Botanic Garden in Ness south of Neston, famous for their rhododendrons and azaleas; the second The U-Boat Story at Woodside Ferry Terminal, where you can board an actual WWII U-Boat, as well as seeing displays and enjoying interactive stuff.
And of course if you feel the need for metropolitan attractions historic Chester with its fantastic shopping is just a short drive distant, and Liverpool with a multitude of attractions accessed via the two Mersey tunnels or (all hum the tune) the ferry cross the Mersey from Woodside, a distinctly romantic little trip.
Information Britain has a wide selection of accommodation options on the Wirral, country house hotels and seaside B&Bs , budget hotels and old inns , cottages and grand urban villa hotels, and a few more choices besides.