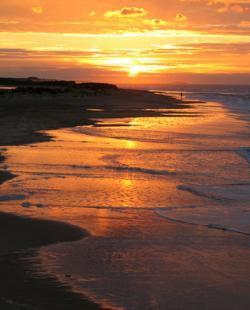 More than five million people take a trip to Norfolk every year, and the majority of them spend some time on the beautiful beaches there. From Gorleston at the eastern tip of the county all the way round to Ingoldisthorpe on The Wash , Norfolks shore curves for 90 miles. But dont expect uniformity. The beaches vary enormously, as do the towns and villages behind them and the countryside surrounding.
Great Yarmouth , bracketed by Gorleston and Caister , forms a large traditional seaside resort complete with Golden Mile, Pleasure Beach , arcades, and seaside rock . But those things developed because of the fine beaches, there being a notable difference between the sands near the piers and the North Denes beach backed with acres of dunes. Yarmouth has a thousand places to stay, including loads of guest houses , but there are grander places like the Hotel Elizabeth too, and chain hotels like the Comfort Hotel on Albert Square. The Cliff Hotel in Gorleston has some great sea views for those who like the beach but from a distance.
Just north of Yarmouth the coastline changes, with some long stretches of beach often deserted except for hardy fishermen casting for whiting, flatties and codling. From Winterton to Paston flat beaches dominate, often huge at low tide, almost disappearing at high tide. At Winterton and particularly at Happisburgh (Haysbrough) you will see the effects of sea erosion writ large. This area is sparsely populated, with lots of quiet cottages available through people like Welcome Cottages and Hoseasons.
Beachcombing is a simple joy, and at Walcott and Bacton those with good eyes may find a flinty fossil or two; and in the winter storms even the occasional bit of amber.
From Mundesley round to about Sheringham you are in Poppyland, beloved of late Victorian visitors. Mundesley, where youll find the Manor House Hotel , has something of the 1930s about it  beach huts, people strolling on the little prom, and a gem of a beach. And no amusement arcades. Overstrand and Sidestrand too have the old fashioned touch  Overstrand was regularly visited by Churchill and the place still has class: The White Horse Inn there well-known for its food and luxurious rooms.
The Norfolk coast can offer some great local delicacies: bloaters from Yarmouth; Cromer Crab ; Stiffkey (Stookey) Blues  cockles - and top-notch fish and chips  there is nothing better after a sea breeze appetiser.
Cromer and Sheringham are rather busier places, but very Victorian too  Cromers Cliftonville Hotel a lovely example of late Victorian gothic architecture; Dormy House in quiet West Runton rather more modern. Sheringham too is packed with accommodation. The stony beach means rockpools, ever a joy for miniature explorers, and parents enjoy watching the little fishing boats launch. The Dales Country House Hotel , once a grand rectory, is a reminder of Sheringham before the age of tourism.
Of course all around Norfolks coast there are caravan sites and holiday villages as another accommodation option, many of them right on the shore, and some in secluded spots the envy of posh hotels.
From Cley (Cly) to Wells is the most rugged part of the North Norfolk Coast, a good place to tramp the Coastal Path. Blakeney has the wild Blakeney Point Reserve  a beach of sorts albeit a windy one - a must for bird lovers, with the Blakeney Hotel a haven of comfort in the village. And dont miss the seal colony. Cley has salt marsh rather than sands, but by Wells the sands make a return in style, reached through scented pines  the same applies at Holkham, which some may recognize from Shakespeare in Love .
At the northwest corner of Norfolk Brancaster beach is different again: sands and mudflats cut by creeks, another wildfowl haven. The White Horse in Brancaster Staithe is a regular award winner, and a brilliant base for exploring the district. Walkers here can look out for medieval churches just inland.
One of the drier spots in an increasingly dry region, Hunstanton is accordingly busy with a wide range of places to stay. The beach is wide too, with interesting cliffs behind it. The Le Strange Arms Hotel is a fine old place, ghost story included; or how about the Briarfields Hotel , putting you in touch with the rural side of the county  it was once agricultural barns. And talking of ghosts, keep a look out for Black Shuck , the demon Viking dog said to roam Norfolks coast  not that in 40 years of looking Ive seen it.
Heacham , where Heacham Manor Hotel is a fine option for your stay, is near the end of Norfolks sandy arc, the sand mixing with stones a little before the mudflats of the Great Ouse take over.
Whether your idea of a beach break is watching the kids make sandcastles or twitching for rare wading birds; a luxury hotel or cosy cottage; eating candyfloss or fresh-caught seafood; strolling to the pub or hiking the coastal path , Norfolks beaches have something to offer. But you will find that walking the beaches becomes an obsession: finding fossils; collecting salty driftwood for a cottage fireplace; spotting the seals: simple pleasures that make enduring memories.