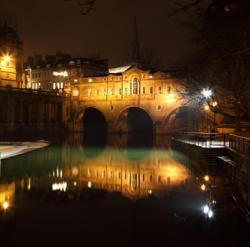 A Winter Break in Bath

It may just be that a break in Bath in wintertime ticks every imaginary box on the mental list youve been considering. Shopping; food; a bit of culture; wonderful surroundings; a dash or several of history; and maybe that vague something different that youd like to find.
As regards the shopping, for two weeks or so in November and December Bath hosts the most celebrated Christmas Market in Britain: more than 100 wooden chalets selling craft items and artisan foods  who is insensitive to the smell of sausages cooked in the open air?  with other stalls to boot, and all in the shadow of magnificent Bath Abbey . Alternatively you can head to the recently completed SouthGate Centre, which houses a huge Debenhams amid a multitude of other outlets ; or make for Jollys on Milsom Street, now owned by House of Fraser but with the style fitting for one of the oldest department stores in the land. Check the many antique shops for period pieces too. All that retail therapy may necessitate a bit of spiritual balance: the Abbey has short carol services spaced over the festive period; and the Pump Room can generally be relied on for carol concerts sometime in December  or you could just take a genteel cup of tea there if you prefer.
The Christmas lights appear from mid-November, but they are eclipsed by the celebrated New Years Eve Fireworks around the Abbey.
Bath has become synonymous with Jane Austen , a little strangely given her penchant for satirising its pretensions. It would be wrong to visit the city without doffing the hat to our greatest novelist of manners: The Jane Austen Centre makes the effort to reflect Regency times in its displays over the winter, one of many sites in Bath linked to the author.
For parents of younger children as yet less than fascinated by Pride and Prejudice a bribe or two may be in order to retain cooperation: the vendors at the Christmas Market will amuse for a time, but eventually a ride on the traditional carousel there may be called for; and for well-behaved offspring (and parents) the annual panto at the Theatre Royal beckons. The Royal is one of five theatres in the city, so rather more demanding fare can be found if Its behind you, chills your very heart (in which case paradoxically you may not have one).
The food stalls at the market apart  chestnuts, sausages, chocolates and more besides  one of Baths greatest sources of culinary pride is the Sally Lunn Bun , celebrated in Sally Lunns House . Another museum with a certain quirkiness to it is the Bath Postal Museum in Northgate Street, for those right-thinking people who are fascinated by post-boxes and stamps. And William Herschel who to the delight of schoolboys discovered what was eventually named Uranus while living in Bath is commemorated with his one-time home now a museum of astronomy on New King Street.
If anyone can rival the Brits at doing Christmas its the Americans. You can enjoy an American take on the festivities by visiting the American Museum at Claverton Manor just outside the city, with different displays every year pertaining to how they mark the holidays.
Rivalling Jane Austen for primacy in our view of Bath is of course its Georgian architecture, particularly The Royal Crescent , begun in 1767. Steel grey winter skies provide a clean backdrop for its beauty. The Royal Crescent Hotel at Number 16 is just one of more than 140 places to stay listed on Information Britain, many of them in splendid historic buildings. If visiting The Royal Crescent in the evening do keep a lookout for Sheridans ghost eloping with his wife-to-be from Number 11  the delicious licentiousness.
It was not just the Georgians who made good use of Baths delights; you will be treading in Roman footsteps too, or perhaps splashing in them. They founded the Baths , a concept brought into the 21st century at the Thermae Bath Spa; and at the Bath Spa Hotel .
Before you leave you must take a moment to look at Bath Abbey, a structure that will be in view for much of your stay, and which can put things nicely in historical context: its Saxon forerunner witnessed the coronation of the man who can lay (much disputed) claim to being the first King of England . The sort of thing, like the city itself, that sticks in the memory.