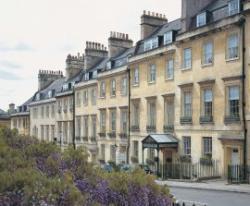 The great novelist would have found it rather ironical that the city she so often mocked for the pretensions of its residents and visitors, and above all for the marriage mart that drew them, should today be so closely associated with her.
Yet it was not the fabric of the city itself that she disliked, although as a country girl at heart she by far preferred her homes in Steventon and later Chawton . Bath provided an elegant background to some of her works, and the sense of excitement that the then new Palladian architecture must have generated is reflected in her words.
Jane Austen 's parents were married in Bath , and it was to the fashionable spa city that they wished to return when her clergyman father announced in 1800 that he was to retire, leading to their stay in Somerset from 1801 to 1805. Jane had already visited the town at least twice before the turn of the century, as every daughter of the gentry or nobility would have expected at that time. Bath was a place of theatre - in terms of plays staged there, but also more personal dramas that occurred during the other great attraction of the day - the grand public balls held there.
When the Austens moved to Somerset they occupied 4, Sydney Place, a typical Georgian townhouse of honey-coloured stone with identical sash-windows, not grand but decidedly solid. When the Reverend Austen died suddenly his wife and two daughters Jane and Cassandra moved to what is still a Georgian gem, but which was a little less impressive (and expensive) than their earlier residence, 25, Gay Street. Both buildings have wall-plaques denoting their link with the great author.
Gay Street is a must for Austen-inspired visitors to Bath, not only for Jane's house, but for the Jane Austen Centre at number 40 on the same street. In Persuasion the street merits a mention at once approving and satirical, with the Croft's lodgings there meeting the snobbish Sir Walter Elliot's standards such that he feels able to visit them.
The vivid world of Georgian Bath is perhaps best portrayed by Austen in Northanger Abbey, written before the family became residents, but revised in 1803 during their sojourn. The Bath Catherine Morland visits with her friends the Allens is a whirl of balls, but many of the people met with prove to fall short of the standards of fidelity and decorum dear to the author's heart - Isabella Thorpe and Captain Tilney above all. But it should be recalled also that in Persuasion, written some time after Janes years there, Anne Eliot and Captain Wentworth are reconciled because of events in Bath
The background to the Bath episodes in her works is little changed from what Austen would have seen two centuries ago: the Pump Room of the fashionable spa resort can still be visited; the Royal Crescent mentioned in Northanger Abbey stands as perfectly elegant as it did back then; and landmarks architectural - like the Pulteney Bridge - and cultural - such as the ancient home of Bath's famous Sally Lunn Buns pepper the ancient settlement.
On the subject of food, those who want to travel back in time to the Georgian era should assist their journey by trying a Bath Chap (the chap in question being a variant of the word chop rather than referring to a male resident), though this bread-crumbed chunk of pig's cheek is not easy to find even in its home city.
A trip to Bath is worthwhile even for those not acquainted with Jane Austens novels  though with so many wonderful television renditions it is unlikely that this will be the case. It is a city with character, and history, and that word so often used but so applicable to things Georgian, elegance. The Austen element adds colour, but it may well be the architecture that stays in the memory long after a visit.