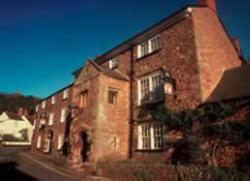 The Luttrell Arms is set in one of the prettiest villages within the Exmoor National Park and built around a Gothic Hall. This is an ideal choice for walking and exploring the countryside, offering distant views of the sea and Welsh coast beyond. The Luttrell Arms has an AA 3 Star Hotel Rating.Dunster is located between Exmoor National Park and The Bristol Channel, Dunster itself is dominated by Dunster Castle. The Luttrell Family Home is a National Trust Property and the village itself is a time capsule waiting to be discovered.The Luttrell Arms itself is a charming historic 15th century hotel which acted as a guest house in medieval times. It is an escapists paradise with its Exmoor National Park Surroundings. Its stylish, comfortable surroundings ensure that even insomniacs drift off to sleep to the sounds of whispering monks from over 500 years ago.Check Out is by 11:00. We are a no smoking accommodation. Pets can be accommodated by prior arrangement. There is a supplement of £5 per night. Children are welcome, under 14s are free of charge, excluding meals.With its oldest section dating from 1443, the Luttrell Arms was formerly a guest house for the Abbots of Cleeve and is perfect for exploring medieval Dunster and further afield into the Exmoor National Park. Its restaurants, two bars and a lounge with open fires in winter make this a great short break base.