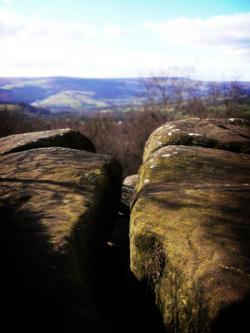 Marsden Moor , situated in a vast swathe of Moorland, is a National Trust owned property in West Yorkshire, England. It is an area rich in archaeology due to its use as a nexus to crossing the moors. Remains have been found from pre-Roman times up to the Industrial age of canals and railways. The moorland itself is rich in a variety of fauna and flora, containing large quantities of birds and as such is a designated Site of Scientific Special Interest (SSI). One interesting monument is Eastergate Bridge, an old packhorse bridge dating from the 17th century.