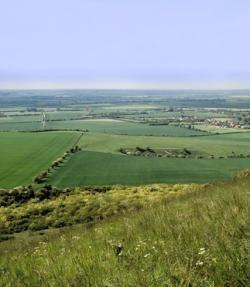 The Aylesbury Vale (or Vale of Aylesbury) is mainly situated in the county Buckinghamshire, England. It is made up of a large area of flat land with Milton Keynes at the northern edge, with Leighton Buzzard and the Chiltern Hills marking the eastern and southern boundary. Thame lies on the southern reach of the Vale with Bicester at the western limit of the region. The vale derives its name from Aylesbury , which is now the county town of Buckinghamshire. Winslow and Buckingham are two other of the main towns that lie within the vale. Geologically the bed of the vale is mostly formed of clay that was left behind at end of the last ice age. As it melted the receding ice left the vast underground reserves of water now found in the region. This means a water table that is higher than average is present in the Vale of Aylesbury. The natural beauty of the rolling hills found in the region attracted the wealthy and influential from London . These included the Rothschild family who came to Aylesbury Vale in the 19th century to build the impressive French Renaissance-style chateau at Waddesdon . Aylesbury Vale, being around a one hour drive from Central London, still attracts plenty visitors and commuters today.