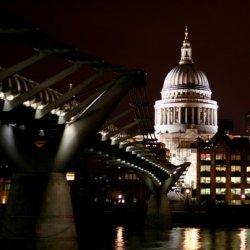 The Millennium Bridge between Bankside and the City in London was not the only millennium project to be completed late  the London Eye for one shared that dubious honour  nor to be over budget  the Millennium Dome put into shade the £2 million overspend on the new Thames crossing. But it gained notoriety because it was closed  albeit temporarily - on the very day it opened, June 10 2000.
Undoubtedly beautiful, the bridge that provides a pedestrian-only crossing between the Globe and the Tate Modern on the south bank and St Pauls the north began to wobble somewhat worryingly when it was used by walkers on a Save the Children charity event marking its opening. After two days the bridge not only had the nickname the wobbly bridge, but also had to close while a solution was found. The closure lasted two years, dampers fitted in that time solving the problem: crossing the bridge, well away from motorised traffic, is one of the simple  and free  pleasures of a day in the capital.
British history had at least one precedent for the problems: on April 14 1831 the Broughton Bridge in Manchester collapsed when soldiers marching across it in step created a resonance that led in its case to a sudden catastrophic failure.