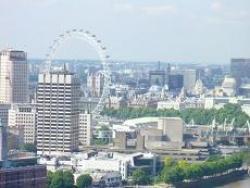 On October 10 1999 the Millennium Wheel reached the end of phase one of its assembly and lifting into place, still at an angle of 65 degrees but nevertheless already dominating the Central London skyline. Crowds gathered to take the sight in.
As the construction rose into the sky controversy about the giant Ferris wheel subsided. Many had decried the idea of such a frippery by the Thames , among the high-culture icons of the South Bank and opposite the Houses of Parliament . But towering above the surrounding area it was immediately evident the structure added a marvellous modern touch to the capitals architectural heritage: it was and is undoubtedly beautiful. For all the complexity of its engineering and fabrication  companies in the UK, France, Italy, Germany and the Netherlands were involved  and despite the wheel being 1700 tonnes of steel and cable and air-conditioned pods  it is elegantly simple: a big wheel 135m tall that gently carries sightseers high above London.
Though embarrassingly the January 1 2000 deadline to be operational was missed The Eye - as it is universally known whatever name-changes corporate re-brandings bring - is now the UKs biggest visitor attraction. As lovely at night as in the daytime, a more fascinating focus for New Years Eve celebrations than Trafalgar Square , The Eye has long passed the five-year lifespan for which planning permission was originally given, and looks set to be Londons equivalent of Pariss temporary landmark, the Eiffel Tower.