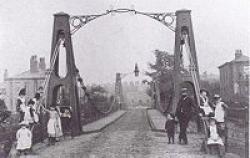 There is nothing new in the world. Problems with resonance which hit Londons Millennium Bridge , causing it to be closed for nearly two years, were not totally dissimilar to those which in 1831 brought down the suspension bridge over the Irwell between Broughton and Pendelton in Manchester.
Broughton Suspension Bridge had been in use about five years when it suffered a catastrophic collapse, though happily no fatalities ensued. A small column of 74 soldiers marching four-abreast was crossing the bridge heading back to barracks in Salford . The bridge began to move in time with their step. The resonance increased as they moved further across, and as they playfully timed their paces deliberately to augment the swaying movement. As the column reached the far end one corner of the structure gave way at the other throwing 40 or so of the men into the river, at that time thankfully shallow. It seems the resonant frequency they set up by their well-timed marching put stresses on a major component, breaking it suddenly.
Six of the men broke limbs in the fall, and another dozen or more suffered lesser injuries. Ever since the incident British troops have broken step as they cross bridges, avoiding the danger of resonance building up.