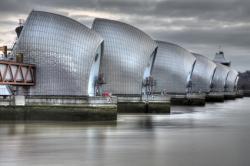 The danger  and reality  of flooding in London is nothing new. In 1236 there were great floods that swept through Westminster . In December 1663 the City was inundated after unprecedented tides. And in 1928 14 people lost their lives in the capital as the Thames breached its defences.

But it was the events of February 1953 on the East Coast that rang alarm bells in both central government and the London authorities. Had circumstances been slightly different the massive tidal surge that led to the deaths of more than 300 people in Norfolk , Suffolk , Lincolnshire and Essex , and almost 2,000 in the Netherlands, might have hit London. The human and economic costs of floods of similar power reaching the city would have been enormous.

Thus studies were set in motion, reports compiled, and engineering development work carried out to assess how to combat such tidal surges, and what the costs would be.

Work finally began on the Thames Barrier project in 1972, to a radical design suggested by Charles Draper, who envisaged using rotating gates that could be housed on the river bed, out of the way of the traffic using the great waterway when not required.

The Barrier was sited at Woolwich because of the strength of the chalk layer beneath the River Thames at that point, able to support the massive piers, and because the banks there are favourably straight.

The design incorporates ten pivoted gates between piers set deep into the river bed, spanning 523m bank-to-bank. The main openings in the centre span 61m each, their gates weighing 3,700 tonnes apiece. Either side of these main openings is another 31m gate that can be navigated by shipping, and two more of similar width that do not allow for water-borne traffic to pass, making a total of ten openings each with a gate that can be raised when a tidal surge threatens.

It was intended that the Barrier provide protection against any likely tidal event that could be predicted to 2030, and it seems now that the lifetime expected for the structure, to at least 2040, will be achieved. But the frequency of dangerous conditions is increasing, due to a combination of factors.

London, as was known when the project was first contemplated, is sinking into the clay on which it is built. Global warming, not taken into consideration in the 1950s and 1960s, means sea levels are rising as the ice caps melt and the warming water of the oceans expands. And with climate change come stronger storms able to drop greater volumes of water on the land than would have been expected half a century ago.

Thus while in the first ten years of operation the Barrier was only raised in anger as it were ten times, in the next ten year period it was used five times as much, and the frequency at which it is required  signalled by meteorological data, tide data, and information from the flow of river water at Teddington weir  is increasing still. It is now thought likely that a further barrier will be required further down the Thames estuary if probable future weather and tide conditions are to be defended against.