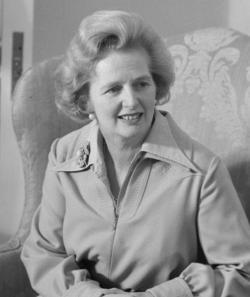 'You may have to fight a battle'... More

Daughter of grocer and lay Methodist minister. Read chemistry at Oxford, went on to read law. Elected MP for Finchley in 1959, became leader of Conservative Party in 1975, then Prime Minster in 1979. Period of office saw the Falklands War, miners strike, reduction of power of the unions, high unemployment and introduction of the poll tax. Resigned as leader in 1990, did not stand in 1992 general election. Created a life peer.

Contributors: Do you have a site related to Margaret Thatcher?
Supply some content for this page and we will gladly add a link to your site. Email here.