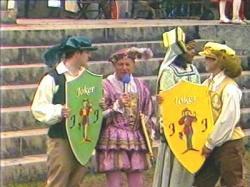 Its easy to mock The Grand Tournament, more commonly referred to as Its a Royal Knockout, which does take some of the fun out of it. We should remember too that the 1987 programme raised more than £1 million for Save the Children and Shelter, among other charities. But its a royal embarrassment would have been a more accurate title.
Staged at Alton Towers , the event was the brainchild of Prince Edward. He had already shown an ability to survive embarrassing himself on stage while studying at Cambridge, and perhaps felt that was a good foundation for working in the media and theatre. The Grand Tournament was the first TV programme he produced. It was indeed good-hearted, and with the royal connections  he was one team captain, Prince Andrew, Princess Anne , and the then Duchess of York the others  managed to attract a host of celebrities to participate in the silly games. But there was something innately cringe-worthy about the thing: archness is best in small doses, not dragged out. Seeing the famous made ridiculous likewise works if it comes suddenly and shockingly, but not when it is repeated ad nauseam.
It is said the Queen and Prince Charles both disapproved. As perhaps they had feared, the sight of senior members of the royal family in silly costumes shouting inanities and clapping themselves did nothing for the mystery and majesty of the House of Windsor. Some have seen this as the starting point of a decade or more of declining royal fortunes, even confirmed royalists having difficulty in respecting Prince Edward after he flounced out of the post-event press conference. The Duchess of York soon found other ways to surpass Edwards efforts for the republican cause.
Celebrities involved included Jenny Agutter , Aled Jones (who had to announce the games in a pseudo-heraldic style, my how they didnt laugh), Cliff Richard , and Paul Daniels . One who probably did his future media career no harm was Gary Lineker , then in his pomp playing for Barcelona: he came across as a natural on the box - unlike Prince Edward, Prince Andrew, and definitely Princess Anne. But still, charities did benefit to the tune of £1 million or more.