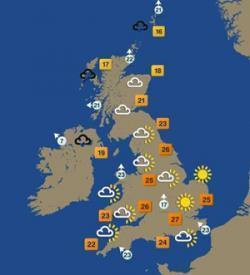 Weather forecasts had been part of the BBC radio output since November 14 1922, when a trial effort was made; and in March the following year daily weather forecasts began on that medium. The fledgling television service broadcast from London had a go in 1936 again on a trial basis, but with the intervention of WWII and perhaps the very small audience numbers involved for television it was not until July 29 1949 that weather forecasts on TV became a regular feature.
On that July day what BBC viewers saw was not a weather forecaster in sensible jacket pointing at stuff, but simply a map and captions. The British public had to wait a further year until the first weatherman appeared: George Cowling, a 32-year-old Yorkshireman, who on January 11 1954 appeared with that high-tech device - an easel to contain maps.
This was a long way from the slick systems we now have, and given the relative infancy of scientific weather forecasting the service didnt have the best reputation with the people of Britain. But it was a start, and thanks to the British fascination for our weather (other countries only have climates) the TV weather forecast eventually became part of our daily routine.