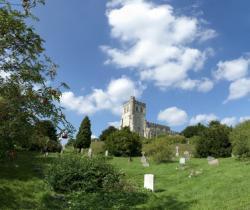 John Bunyan , most celebrated for his authorship of Pilgrims Progress, spent nearly all of his 59 years in his native Bedfordshire  a fair few of them imprisoned there for his non-conformist religious beliefs. There are many sites in the town of Bedford , and just south of it the village of Elstow , associated with Bunyan.
Access to the main Bunyan sites is easy: Elstow and beyond it Bedford are just a 10 or 15 minute drive up the A421 from junction 13 of the M1, and Bedford has a mainline train station.
Bunyans beginnings were very humble: he was the son of a tinker, his father making the bulk of his living from mending pots and pans. It seems, however, that the family had gone down in the world, as there were (and are) fields around Elstow named for them: an ancestor, William Boynon (spelling in those days being negotiable) was resident in the hamlet of Harrowden 301 years before Bunyans birth in 1628; fields called Bunyans and Further Bunyans are the probable location of the cottage, now long gone, in which he was born, and those wishing to explore will find a plaque marking the most likely spot for this habitation. In the century before Bunyans the whole area around Harrowden was often called by such nicknames as Bunyans Walk.
Though not actually Bunyans, there is a row of cottages that he would have known in the village, restored to period authenticity.
The village green in Elstow where the future preacher once played cat, or tip-cat is still there. Bunyan as a lad was famous for his swearing, and it was while filling the air with expletives during one such game (a version of rounders), on a Sunday, that he had a moment of revelation about his future salvation or lack of it were he to continue living thus.
In Elstow too is the Church of St Helena and St Mary at Elstow Abbey, still with the communion table he would have used as a young worshipper there, and the font in which he was christened on November 30, 1628, just two days after his birth. He was baptized again in 1653 by his great mentor John Gifford in the Great Ouse at Bedford. Elstow Moot Hall, the epitome of half-timbered quaintness, is very close as well, containing displays linked to Bunyan.
After serving in the Parliamentary Army as a teenager Bunyan returned to Bedford to follow his fathers trade, and eventually to marry. His first wifes dowry, just two religious books, nudged him further towards the religious life, and he began attending St Johns Church in Bedford  the rectory on St John Street can be visited, again with Bunyan artefacts to be seen.
After Giffords death Bunyan became preacher in his stead, and he reached out beyond the church, as he had when practising his trade and talking to his customers and contacts about religion earlier. Bunyan became a deacon at St Pauls Church in the centre of Bedford in 1655.
Even before the Restoration Bunyan faced religious persecution, arrested for preaching without a licence and briefly jailed at the Silver Street prison in Bedford . This persecution worsened after Charles II returned to England in 1660: Bunyan was arrested while preaching near Harlington, 10 miles or so south of Bedford. He was to spend the next 12 years of his life incarcerated for his beliefs, though his original sentence was just three months  he refused to agree to quit preaching were he released. The County Jail Bunyan knew no longer exists, though a plaque marks its site. The Swan Hotel on The Embankment in Bedford still stands, however, and it was at the Assizes here his second wife Elizabeth pleaded in vain for John to be released.
A further gaol term was served by the preacher from 1675, in the long ago demolished town jail on the bridge over the Great Ouse, and it was then that he wrote Pilgrims Progress.
Though he died in London in 1688 on one of his rare periods out of Bedfordshire, it is Bedford that is without doubt Bunyan country. The towns museum in Castle Lane has plenty of material on the author, but of greater interest still to Bunyan aficionados is The Bunyan Museum on Mill Street. Not only is it dedicated to his life, with some fascinating relics of the great man (including his tin violin); but it occupies the site purchased by his congregation in 1672, and the museum building itself was the church in which he preached (replaced by another in 1849).
And of course the town, proud of its most famous son, has a statue of him (paid for by the Duke of Bedford), erected on St Peters Green in 1874, the smiling author cloaked and fittingly carrying a book in his hands.