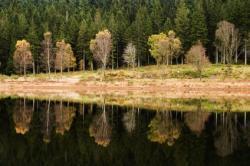 A titan of Scotlands literary heritage, Sir Walter Scott s legacy is inextricable coveted by The Trossachs , whose fortunes as a tourist region soared after his 1810 poem, The Lady Of The Lake brought the area to life.
The Trossachs was hitherto a relatively undiscovered quarter of Stirlingshire , not famed, and certainly did not experience the footfall it does now. Nowadays, on public holidays, all roads point to The Trossachs. With farmland and woodland stretching as far as the eye can see, it is easy to see its appeal. Factor in the 22 lochs that secret themselves within Loch Lomond and The Trossachs National Park, and the Queen Elizabeth Forest Park which borders some charming wee towns like Aberfoyle, and it is a wonder it took Scotts inspiration to bring the tourists en masse.
That it did. But it was not just The Trossachs that would reap the benefits of The Lady Of The Lakes huge popularity  more than 25,000 copies sold in the first year of its release  as it would see Scott receive widespread international acclaim for his talents for the first time. And it is a feature of Scotts literary career that his earlier oeuvres should reflect his surroundings. The Lady Of The Lake was written whilst he was holidaying with his family at Loch Katrine in The Trossachs  the idyllic setting could not have failed to be on of his muses. Illness in his family  his children came down with fever  delayed him, but once again, Scott had taken heart from his surroundings, just as he had done eight years previous when he penned The Minstrelsy of the Scottish Border.
Scott spent his childhood in Edinburgh s dilapidated Old Town. It was there he contracted polio. For the good of his health he was shipped down to the Scottish Borders  this was where his intimate grasp of the English language began. He was taught to read by an aunt. But moreover, at his Sandyknowes home, he became besotted with the myths, fables and tales of derring-do that so chartered the oft-turbulent history of the Scottish Borders . These tales did not leave him. They would return in the form of his literary debut, The Minstrelsy of the Scottish Border, a collection of his ballads. For Scott, this was the first step in a career that would mark him as the preeminent Scottish writer, and a man who fused Scottish history with his own imagination, reanimating the countrys past with the most descriptive prose.
The Lady Of The Lake had all of the ingredients of an epic tale  romance, vengeance, drama, and loyalty  and it would not be the last time that Scott would work his mojo in the wilds of The Trossachs. His 1817 novel Rob Roy returned to the land where the real Robert Rob Roy Macgregor lived just out of reach of the lawman, stealing livestock and achieving an infamy which was stoked by Scotts novel, and sustained in Scottish folklore. The Rob Roy Trail stretches the 79 miles from Drymen to Pitlochry ; Scotts reputation went somewhat further. The Trossachs success is forever indebted to Scotts work.