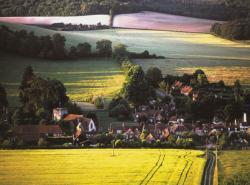 When Dahl returned to England with his family from what had been a hectic and at times difficult life in New York, they chose to live in Buckinghamshire , one of Britain's quiet backwaters, perhaps a deliberate contrast to the bustling Big Apple.
In 1960 Dahl and family moved into Gipsy House in Great Missenden . Still owned by his second wife Felicity, Gipsy House opens a handful of times through the year, so it is best to check on this beforehand. It was in a hut in the garden that Dahl wrote his children's fables, and in the front garden a caravan can be found that afficionados will recognize as belonging to Danny, Champion of the World. Dahl is buried in the lovely church of St Peter and St Paul in the village, a typically English religious building in that it has been added to over the years, starting in the 15th century, though it is home to a 12th century font.
A must see for visitors to Great Missenden is the Roald Dahl Museum and Story Centre on the High Street, home to the writer's archive, and forever hosting activities and events to feed young minds, with Cafe Twit to look after stomachs too.
Buckinghamshire's county town, Aylesbury , is these days part of London's ever widening commuter belt, a place with a huge mixture of architectural styles. The Buckinghamshire County Museum at Ceely House itself offers several styles, from the late medieval onwards: here at the Coach House, built in the mid-18th century, is The Roald Dahl Children's Gallery, and next to it Matilda's Library in a tiny cottage.
Though he was Welsh by birth and Norwegian by blood, Dahl was a very English eccentric and writer by choice. He was a keen walker, and is said to have loved the Chiltern Hills , part of which lies in Buckinghamshire. The Chilterns form an Area of Outstanding Natural Beauty, rolling hills and old woodland, quiet villages with some of the prettiest chocolate box cottages to be seen in all of Britain. A good place to get taste of the area is the village of Turville, setting of television's Vicar of Dibley. Overlooking Turville is the Cobstone Windmill in the neighbouring village of Ibstone - a walk from one to the other up a very steep slope will stretch the legs nicely. The windmill was used in the film of Chitty Chitty Bang Bang, scripted by Dahl.
It seems strange somehow that the creator of such delightfully disturbing stories (some of us still have nightmares about the Child Catcher) should have lived in such a gentle part of the world. Perhaps Dahl needed the peace to stay sane. And which of us these days couldn't do with such peace of his or her own on occasion?