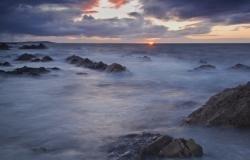 Aberdeen
Did you know that whilst renowned as the Granite city Aberdeen is also know as the city of bon accord (goodwill, friendship)
Did you know that background radiation in aberdeen is twice that of the rest of the UK
Did you know that the poet Byron began his schooling in Aberdeen, at the grammar school? He was just six when he started attending that establishment. Economic necessity had forced his mother  a Scot née Gordon - to the town, his dissolute father having spent the family i.e. his wifes fortune on drink. He left aged 10 on inheriting a title and property. One of the schools houses is named for Byron, and a statue of him stands in the grounds.
Did you know that the biggest man-made hole in Europe is the remains of Rubislaw quarry in Aberdeen? The now water-filled hole is 466 feet (142m) deep. The estimated six million tonnes of stone dug from the quarry built not only the Granite City itself, but the terraces in front of Parliament and Waterloo Bridge among other structures. It was worked from 1740 to 1971.
Did you know that Aberdeen has won the Britain in Bloom contest a record 10 times?
Did you know that Aberdeen Football Club 's Pittodrie Stadium was the first all seater stadium in Britain ?
Did you know that St Machars is the only Medieval all Granite Cathedral in the World?
Alford
Did you know that Craigievar Castle near Alford was the inspiration for Walt Disneys fairytale castles? The 17th century structure (actually built over one from the previous century) is a flamboyant example of Scottish Baronial, all sheer walls and cylindrical turrets, now restored to its original pink, echoed in cartoons and Disney theme parks the world over.
Braemar
Did you know that Braemar is officially the coldest place in Britain? The lowest ever recorded temperature in the country has been registered twice in the Aberdeenshire village: On February 11 1895 and January 10 1982 the thermometer at Braemar dropped to -27.2 Celsius. Its mean temperature is a mere 6.5 Celsius. Not sure Id fancy a kilt worn in the traditional manner.
Craigellachie
Did you know the bridge at Craigellachie is the oldest iron bridge in Scotland? Completed by Thomas Telford in 1814 it was of a radical new design, its cast-iron arch far shallower than would be possible with masonry structures. Made from high-tensile material it is still used by pedestrians and cyclists  it was the sharp turn at one end rather than wear-and-tear that ended its use by vehicles.
Dufftown
Did you know that tiny Dufftown is one of the top four Euro currency earning towns in Britain? Its population is well under 2000, but many of them work in the various distilleries there including Glenfiddich and the wonderful Balvenie ; the town calling itself with some justification The Whisky Capital of the World.
Fochabers
Did you know that Baxters Food, started in Fochabers by George Baxter in 1868 was the first to use twist-off caps on their jars? The company was launched with the help of a £100 loan from Baxters uncle, initially a grocery shop then branching into supplying preserves to other grocers. It is still based in Fochabers, headed by the great-granddaughter of the founder.
Fraserburgh
Did you know that Fraserburgh is Europes largest shellfish port? In 2008 it landed over 12000 tonnes of shellfish - prawns and king scallops especially important there. Fraserburgh is likewise the largest pelagic fishing port (fish not caught near the sea-bed) in Europe, accounting for on average 40000 tonnes of whitefish a year. Accordingly fishing and related processing employ roughly 60 per cent of the towns working population.
Keith
Did you know that Keiths Strathisla Distillery is the oldest whisky distillery in the north of Scotland? It can be dated with certainty as far back as 1786, when it was a farm distillery, and may be older than that. The late great Michael Jackson (the drinks writer not somewhat odd pop-singer) claimed that its roots go back to Dominican friars making beer in the place in the 13th century.