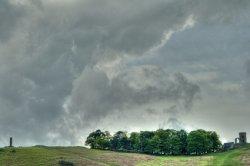 Hinckley
Did you know the Hansom Cab (which when mechanical (taxi-)meters were installed to determine fares became the first taxi) was invented in Hinckley by Joseph Hansom in 1834? Hansom was by profession an architect, at one time collaborating with Pugin , and was responsible for several fine churches. His cab design was a major technical advance with innovative safety features. Hansom sold the patent for £10,000, a fortune in those times: sadly the sum was never paid.
Leicester
Did you know that the body of Richard III was brought to Leicester after the Battle of Bosworth Field? When Henry VII s men discovered it the body was belatedly hanged, then buried in Greyfriars Church in the city. Later it was said to have been exhumed and thrown in the River Soar .
Did you know that in August 1485 Richard III spent the night before the Battle of Bosworth Field at the Blue Boar Inn. It was his last night alive although his body was returned to the city the next night. Legend has it he left £300 in gold hidden in the bedstead he used that night, and that more than a century later the landlady was killed for the money.
Did you know in 1841 Thomas Cook organised the worlds first package tour from Leicester - it went just up the road to Loughborough for a temperance meeting? For just a shilling each the 570 temperance activists got their rail travel and food on the journey.
Did you know that Radio Leicester was Britains first local radio station when it began to broadcast in 1967? The station hit the airwaves on Thursday November 8 that year, broadcasting for just four hours per day initially.
Loughborough
Did you know that the towns John Taylor Bell Foundry of Freehold Street in Loughborough is the largest in the world and is responsible for making the countrys biggest bell - the Great Paul which weighs 17 tonnes - which rings out from St Pauls in London? The business began in 1784, moving to Loughborough in 1839. They also made Great George, the 14-tonne giant at Liverpool Cathedral which is Britains next largest.
Melton Mowbray
Did you know that the expression painting the town red is said to originate from an event in Melton Mowbray in 1837? A few loutish aristocratic hunters led by the notorious Marquis of Waterford, out celebrating a day of success, daubed red paint on houses, pub signs, and the toll-bar there. Traces of the paint can still be seen on older buildings in the High Street.
Did you know Melton Mowbray has three famous food connections? It is renowned for the very wonderful raised pork pie that proudly bears the towns name; for Stilton Cheese ; and for Red Leicester , the last product originally made it is said only when the market would bear no more Stilton.