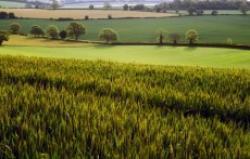 Touring the Vale of Evesham

Depending on how you look at it, The Vale of Evesham either suffers from its competition with the neighbouring Cotswolds and Malvern Hills , or benefits  its certainly not empty but youll find fewer coaches blocking the lanes here! Strange in a way, as both countryside and villages are lovely, and Evesham itself a fascinating medieval town.
You can thus hope for a relaxed atmosphere for your tour, which given the relatively small area and rolling rather than steep slopes could be undertaken by cycle with a little planning, though most of us are wedded to our four wheels and it is a nice place to motor. Alternatively a cruise along the River Avon , though obviously restricting your route, is a tranquil way to enjoy the Vale created by that river  combine the two and arrange bikes aboard  of the sites we list below Bretforton is the furthest from the Avon, and that trip still shouldnt take an hours pedalling.
For a short break with no real need for transport beyond the train arriving at Evesham Station the capital of the vale offers plenty to fill a pleasant weekend or so  take a taxi if youre puffed! The towns ruined abbey (founded in 701AD), its 16th century bell tower the last full standing structure, is a must, the gardens great for a short stroll. The towns almonry is another splendid building but then Evesham has more than its fair share  the half-timbered Round House which has pride of place in the market square for instance, a magnificent black-and-white former inn now a bank. The hand-pulled ferry across the Avon between Evesham-proper and Hampton is not the only draw there  the riverside meadows are exceptionally pretty, though its the now unique ferry that will stick in the memory. Simply wandering down the little lanes around Evesham will be a pleasure, this area famed for its market gardens and orchards  Pershore to the west of the Vale known for its plums. Come in May and youll hit asparagus time, with a festival to celebrate the crop, and the springtime generally will see the trees in blossom. August and September of course are harvest time.
Mayday is worth targeting in the village of Offenham just over the river north-eastwards from Evesham, as it has a traditional maypole and you should get to see the dancing then, and theres another event in June. Carry on a little further in the same direction and youll come to the Littletons: South, Middle and North, Middle Littleton with a huge old tithe barn preserved by the National Trust .
That same wise organisation also manages the Fleece Inn in Bretforton a couple of miles southwards: a pub since the middle of the 19th century, this magnificent half-timbered building was originally home to medieval farmers. The NT still runs it as an inn, with additional attractions of Morris Dancing, a splendid pewter collection, and an annual asparagus auction.
Head in the other direction a couple of miles above North Littleton and you come to Cleeve Prior, pretty as a picture that inevitably draws comparison with the Cotswolds a short drive distant: village green, wide streets, warm-coloured stone houses in fine fettle, (and high property prices).
Strike westwards and you hit the villages collectively called the Lenches, again with no shortage of picturesque cottages and rather grander buildings too, some the sort of house Jane Austen heroines would have graced.
Continue your journey anti-clockwise to Pershore and another abbey , founded 12 years before its Evesham neighbour, again with a tower (sometimes open to climb up for the views) to remind us of former glories. Trumping the clerical is the lay architecture here, much of it Georgian , and the landscape, with many gardens running down towards the river. The town holds an annual august festival to celebrate its plum crop  the Pershore Purple a culinary gem rivalled by the Pershore Yellow Egg variety. If you have the energy, take the town walk here to get the best of the sights. Outside the town is an old bridge that still bears the scars of a civil war skirmish.
Now head back towards Evesham along the B4084 where youll find Cropthorne on the way, another place rich in timber-framed structures among other architectural gems  a 12th century church for example. But looking out from the village is perhaps equally rewarding, with views across the Avon, much of the Vale and even to the Malvern Hills.
If that all sounds rather hectic, it shouldnt be. Take your time. Stop to admire the views. Have a swift half in or outside a country pub then take a stroll to wear off the effects (or dragoon a designated driver). This being the beginning of the West Country you may like to consider a real cider (not the over-advertised stuff that wont have any of the local character) rather than an ale, though there are local brews of both worthy to be sought out. There are lots more churches, choc-box cottages and rugged old farmhouses to admire, but more than anything else theres the productive (and often edible) greenery, the feeling of abundance you can get in some spots.
Information Britain lists hotels, B&Bs, cottages and caravan sites in and around Evesham . Its such a small area that if you are motoring you wouldnt want or need to move your base; on a bike it may be different, but you shouldnt struggle to find way-stations to suit you.