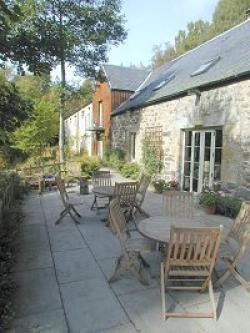 The Cross, Restaurant with Rooms, is found in the lively village of Kingussie, situated in the centre of the Scottish Highlands, surrounded by mountains & lochs.

Nine simple but stylish bedrooms, together with a spacious restaurant, in a converted tweed mill. All set in a tranquil site alongside the river Gynack, with a wealth of birds and wildlife, including deer & otter in the grounds.

Established in 1983, the list of awards and commendations for the accommodation, food and wines is a tribute to the care and attention lavished on guests. They include: Hotel of the Year, twice winners of Scottish Restaurant of the Year and UK Wine List of the Year.

Run under the personal supervision of the owners, Katie and David Young, with a small dedicated team, the attention to detail is evident ............... "staying at The Cross is like being a pampered guest in the home of your favourite doting Aunt" according to one of our guests.

The Cross is open from the 1st of March until just before Christmas each year. The accommodation is open seven nights a week but it should be noted that the Restaurant is closed on Sunday and Monday evenings.