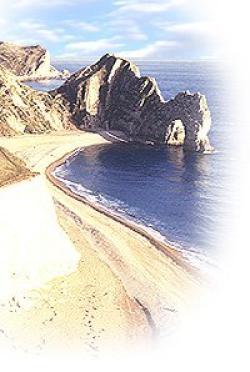 The area known as Purbeck is one of Dorsets best kept secrets. Its dramatic coastline has recently been awarded World Heritage status, designated for its stunning beauty and amazing geological formations. You can explore hidden coves and Jurassic cliffs populated by a wide variety of wildlife including dolphins, puffins and many other rare and beautiful animals.

Much of the countryside inland has been officially designated as an Area of Outstanding Natural Beauty. Amongst this are outstanding attractions such as the dominating ruins of Corfe Castle and an 18th Century Castle at Lulworth with magnificent grounds.

Purbeck is delightful with small villages of stone, cob and thatch. It also has one of the Britains favourite seaside resorts, Swanage, which can be enjoyed by all. Also Wareham, once one of the most important towns in the country in Saxon times, and now a peaceful town in the heart of Purbeck that is gaining a reputation as a centre for locally produced food.

Lots of different attractions abound in the area. The Monkey World Ape sanctuary, the largest in Europe, is a unique attraction and amuses all ages. There is also the tank museum, historic houses and farm based attractions.

High quality accommodation is abundant from hotels to rural farmhouses and there are also many self catering holiday apartments and cottages. Many pubs and restaurants feature throughout the area and to finish off a night out, the beautiful gas lit cinema in Wareham shows the latest films.

There are also so many ways to explore! A steam railway travels though spectacular scenery. However, if you really want to discover the secrets of the countryside, there are many walking routes which take in hidden rock formations, sightings of rare wildlife, spectacular beaches and views over the second largest harbour in the world!