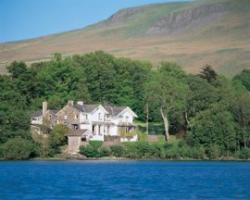 Sharrow Bay is a legend. Reputedly, the first ever country house hotel to be so called, its reputation as a magical luxury hotel is breathtakingly beautiful setting has spread world wide. Quite simply, Sharrow Bay has no equal in the Lake Distict. Nestled in twelve acres of private gardens and woodland on the shore of the stunningly beautiful Lake Ullswater and surrounded by magnificent fells, Sharrow Bay country house hotel is a haven of peace and tranquility with superb views of the spectacular Ullswater landscape. The view of the lake and fells from the dinning room is renowned as one of the finest views in England.

The superb cuisine at Sharrow Bay is internationally renowned. Dining at Sharrow Bay, be it breakfast, lunch or dinner, or perhaps the fabulous afternoon tea, is an experience to be shared and cherished.

Sharrow Bay is the oldest British member of Relais & Chateaux; it is the proud holder of countless hotel and dining awards; it is one of those hotels that must be visited at least once in a lifetime.

After a year in which the Sharrow Bay Wine List has been awarded the Best Award of Excellence by the Wine Spectator and been recognised by the Top 100 UK Restaurant Wine Lists as the fourth best wine list in the U.K, the Sharrow Bay Sommeliers are undertaking 12 incomparable wine tasting evenings over the next 12 months