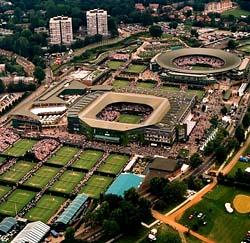 The Museum, set within Centre Court, chronicles the game of lawn tennis from its origins in the 1870s to the present day. Highlights include a view of the world-famous Centre Court and the original Championships' trophies. Watch video footage of great players in action and admire tennis memorabilia that dates back to 1555. Also available is an exclusive behind-the-scenes tour of the grounds at Wimbledon. Both individuals and pre-booked groups of 15 or more have the opportunity to explore the grounds of The Championships and enjoy sights such as Centre Court, No 1 Court, the Fred Parry Statue and the Press Interview Room.

Guests can enjoy a 360 degree view of the arena while exploring the new viewing platform. This platform brings visitors only steps away from the famous grass, providing an up close view of the court from the eyes of a spectator. Interactive touch screens highlight the main features of the venue and deliver a complete overview of Centre Court in eight languages.

The Museums upgraded viewing platform will improve on the capacity of its predecessor, bringing guests lower into the bowl, and create a much more engaging Museum visit. The CentreCourt360 exhibit will be open year-round except during the Championships and adjacent periods. Also included in the interpretation is a Braille Bar giving Braille interpretation of Centre Court for the blind, who can also touch heavily embossed images of the court to learn more about its appearance and the key facts and figures. Following the 2009 Championships the Museum also received several notable items which are currently on display including clothing from Roger Federer and the Williams sisters. Thanks to Federer visitors to Wimbledon Lawn Tennis Museum will have the fantastic opportunity to view the very kit he wore when he made history by claiming the record breaking 15th Grand Slam title in the mens Wimbledon Final. The items of the kit which attracted increasing attention during the Championships, include the famous military style jacket along with his shirt and racket from the final. Visitors to Wimbledon Lawn Tennis Museum will also have the fantastic opportunity to view Serena Williams Nike Mirabella Naxair shoes and Nike wristbands and Venus Williams 11 brand dress and wristbands that the sisters wore as they faced each other in the 2009 Womens Final. In the eighth time that the sisters have gone head to head in a Grand Slam title, Serena emerged victorious as the 2009 Womens Champion before going on to win the Womens Doubles with sister Venus. Donating the dress and wristbands from her own 11 fashion label, Venus demonstrates her talents on and off the court, while Serenas shoes have the numbers 02 and 03 in heart shaped frames, celebrating her last two victories at Wimbledon. All of these items are currently on display in the Championships 2009 showcase. Other museum opportunities for guests this year include longer hours of operation and larger tour group sizes. The Museum hours are now 10am to 5pm, giving more time for visitors to enjoy it. Increased tour groups will allow more guests to view the No.1 Court, the Picnic Terraces and water Gardens with their fantastic views across London, The Millennium Building, Press Interview Room, and Centre Court. Reopened in April 2006, WLTM is the culmination of a five year multi-million pound relocation, redesign and refurbishment. WLTM combines state-of-the-art interactive touch screens with its unparalleled collection of traditional and contemporary tennis memorabilia, all exploring the story of the game and the Wimbledon Championships in a vibrant and entertaining way. An official venue for the 2012 Summer Olympics, Wimbledon hosts some of the worlds best tennis that is rich in history and quintessentially British. Supporting this, Wimbledon Lawn Tennis Museum presents the past, present and future of the sport and has clearly set its sights on becoming the ultimate destination for tennis fans around the world.