B and Bs in Maidenhead 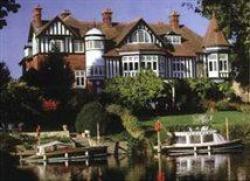 You are assured a warm welcome at Redroofs at Oldfield, the spacious Victorian guest house nestled on the River Thames in Maidenhead. The property has large and comfortable rooms and children are welcome. Remote colour TV, with tea and coffee making facilities in all rooms. Several films and TV programmes have been filmed at Red Roofs. In 1988, the house was used as a location for a feature film called, The Blackheath Poisonings. The Grand Hall was re-decorated for the production and the paintwork on the panelling remains the same today. Other films such as Being Julia, starring Jeremy Irons and Annette Benning, Ballet Shoes with Emilia Fox. Episodes of Morse starring the late John Thaw and Murder Most Horrid with Dawn French. Red Roofs has also been featured in the magazine, 25 Beautiful Homes and were runners up in the Channel 4 TV series, Britains Best Homes. BBC 1 also featured Redroofs in a half hour episode of, A House in the Country.