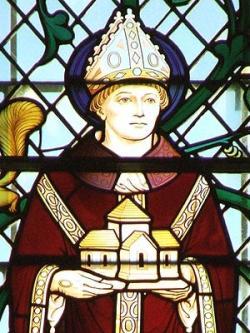 St Wulfstans Day:
St Wulfstan was rather bigger in the Middle Ages than he is today, his feast day now little observed apart from in Worcester where he was bishop from 1062 to his death in 1095. Those dates mean he held that office under the last two Saxon kings and the first two Norman. Wulfstan was a survivor, the only Saxon bishop to retain his post for any time after the Conquest  he made submission to William I to do so. Born in Long Itchington in Warwickshire and educated at Peterborough Abbey he rose from being a lowly monk at Worcester Cathedral through the ranks until he gained the top job, overseeing the demolition of the Saxon cathedral and building of the Norman one. Wulfstan was canonised in 1203 for miracles linked with his tomb rather than his work to end slaving in Bristol, his burial place a destination for pilgrims for centuries thereafter  important enough for King John to wish to be buried beside him.