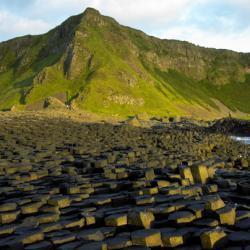 The Glens of Antrim are a collection of nine glens, or valleys, that radiate from the Antrim Plateau to the coast. The area is often known simply as 'The Glens' or 'Antrim Mountains'. The Glens are a popular tourist destination and have been designated as an Area of Outstanding Natural Beauty.

The nine glens are, Glentaisie, Glenshesk, Glendun, Glencorp, Glenaan, Glenballyeamon, Glenariff , Glencloy and Glenarm. Glenravel is often considered to be the tenth glen but, as it doesn't open directly into the sea, it isn't officially classed as a glen. Glenravel lies to the south west of Glenballyeamon and Glenariff. The principal towns in the Glens are Ballycastle , Cushendun , Cushendall, Waterfoot and Carnlough . Glenravel's main population centres are Cargan, Martinstown and Skerry (Newtowncrommelin).

The Glens are famous for their unspoilt nature. The area has been somewhat separated from the rest of Ireland for centuries and this has helped it to retain most of its natural and historical character. It is an area of diversity and contrast with gentle bays separated by blunt headlands. Exposed moorlands give way to gentle valleys and these wild and remote areas contrast with the neat, enclosed farmland.

The Glens offer the visitor such a wide variety of activities that it is difficult to list them all. With so much unspoilt countryside and coastline to see, it is no surprise that walking has long been one of the principle leisure pastimes. There are a myriad of organised walks available. These are ideal for those wishing to maximise their time in the Glens by using the experience and expertise of others to guide them to the best and most interesting places.

The Giants Causeway is a world famous landmark on the coast. The legendary icon and National Trust property is in Northern Ireland's only World Heritage Site and attracts flocks of visitors in all seasons.

Another popular destination is Dunluce Castle , a late-medieval and 17th-century castle dramatically sited on a sheer headland on the north Antrim Coast. Guided tours and various activities are available at the castle from 1st April until 30th September.

Cushendall is an attractive village nestled in the Heart of the Glens of Antrim between the hills and the sea of Moyle. It is often referred to as 'the capital of the Glens' and has a history that dates back to Neolithic times. The area has strong historical connections with Scotland.