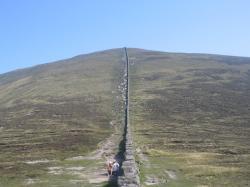 The mountain is close to the small seaside town of Newcastle on the east coast. It sits at the edge of the Mourne Mountains and is just two miles inland from the sea. Its situation means the mountain enjoys spectacular views of the coast. On a good day you can even see as far as Belfast , which is 30 miles to the north.

The mountain is a relatively easy climb and as such is suitable for walkers of most abilities. However, the popularity of the mountain means that the path is very eroded in places. Improvements to the path have been carried out in recent years, and stone has been used to make the path more robust on the steepest parts of the mountain.

The most prominent feature of this mountain is the Mourne Wall running along its southern and western shoulders. The wall was constructed from natural granite stone using traditional dry stone walling techniques. The wall is on average about eight feet high and three foot thick. The 22 mile long wall traverses 15 mountains, all but one of them by going over the higher parts of the mountain rather than the lower slopes. It was built between 1904 and 1922 by the Belfast Water Commissioners to enclose the area around Silent Valley Reservoir and to protect the water from the actions of sheep and cattle.

Slieve Donard takes its name from Saint Domangart, or Domangard, also known as Saint Donard. He was a devotee of Saint Patrick and he is the patron saint of the town of Maghera in County Down. His feast day is celebrated on March 24 and his death is given as 507 AD. His church, Rath Muirbuilc, now called Maghera, was originally at the foot of the mountain near the sea. Historical evidence suggests that he had also an oratory on the very summit of the hill.

There is a popular Spa Hotel at Slieve Donard where guests can enjoy a choice of thermal heat experiences, which include Rock Saunas, Amethyst Steam Rooms and Vitality Pools. The hotel was originally built in 1898 by the Belfast and County Down Railway and has recently undergone a refit. The famous Royal County Down golf course is next door to the hotel for those who prefer to relax on the fairway.

Other County Down Naturals